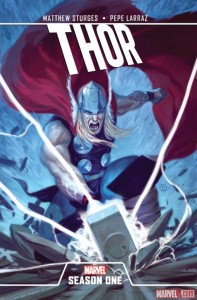 Preamble: The Season One series of graphic novels are, in concept, something this reader loves: stand alone stories featuring characters I know, in situations that I don't need to read 500 issues of backstory to understand. In reality? They are hit and miss and, occasionally, somewhere in between. They cover many of the most popular characters so far, including some with tight connections to the MCU. Like this one: Thor.

Don't know who Donal Blake is? Don't worry, you'll find out. But he is an important part of Thor's comic book history, and this story retells some of that history for you. Do know who he is? Don't worry, you will be given a story that is respectful of the past while reinterpreting it for present day readers. And that's the strength of this series (when it works, that is!): these are new stories, new tellings of stories that have been told before, but with a modern twist or added themes that couldn't be there before, when the characters had not yet been fleshed out.

So what is this story? You may find parts of it familiar if you've seen the movies (and if you're on this website, most likely you have seen them). Thor is cast from Asgard, exiled to earth without his powers, where he can learn some humility and compassion, after almost causing an “international incident” with the Frost Giants.

But now the Frost Giants have teamed up with some other enemies of Asgard and are coming to take over! So Thor must rediscover his lost memories and powers, while also discovering some new personality traits, like patience and self-control.

Lots of action and hammer throwing, of course, ensue.

Level Seven Analysis: I said some of these Season One books are hits and some are misses. Does this hit?

This book, even better than the movie, weaves Thor's legacy from the comics into a single origin story that allows Jane Foster a more logical reason for being part of Thor's life, uses the Donald Blake secret identity from the early comics in a way that actually makes sense, and has lots of slamming action with the Warriors Three and Sif. Loki also has some good scenes.

In a lot of ways, this is very much the story you'd expect if you put the Thor movies and the Thor comics into a blender.

The other great thing about this book is that unlike the other Season One graphic novels, it takes some risks with some non-traditional storytelling techniques, breaking the fourth wall with some narration devices.

Conclusion: If you like the character of Thor, from movies or comics, you'll like this book. The story is strong, the art is strong, and like many stories of this type, the storytellers were able to take and use many of the elements that work from the character' past to create a strong story, instead of relying on BIG and NEW and HIP and EDGY! They were able to just concentrate on GOOD and not worry that something like this was done before.