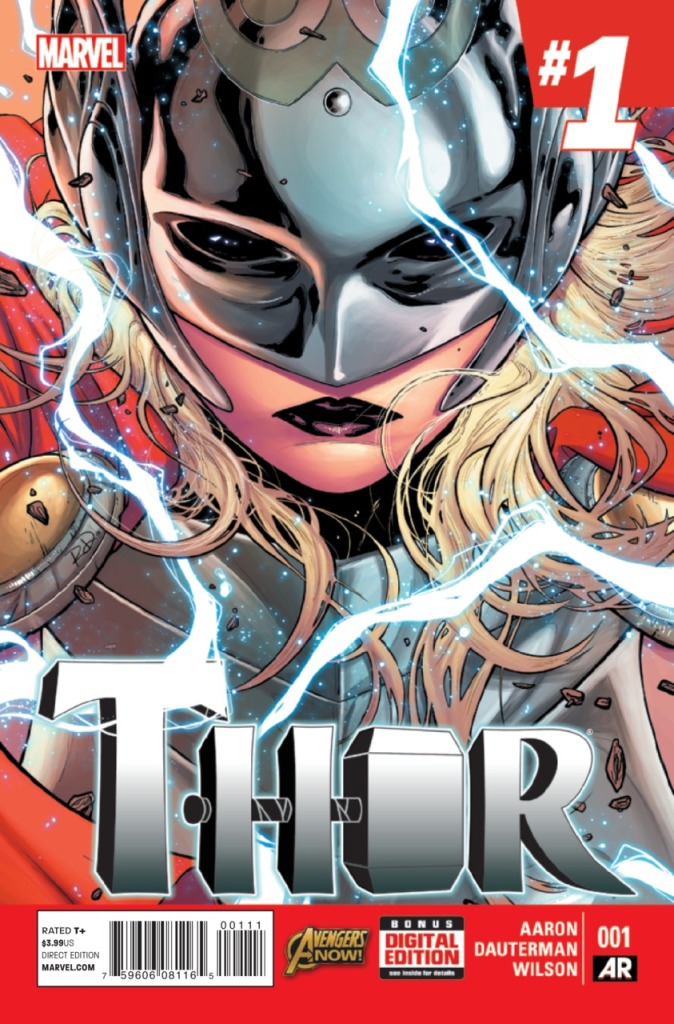 It feels like everyone is talking about Thor! The news for once is not about how handsome Chris Hemsworth is, but about the Marvel 616 where male Thor is being replaced by a female Thor. Now, I am more than willing to give Thor #1 a chance, not because of the gimmick but because of author Jason Aaron.

As Mjolnir rests on the moon, Thor is shattered. He cannot lift his beloved hammer! He is not worthy! This has all because Nick Fury used the most powerful of weapons, words. As Thor attempts to lift Mjolnir, the other Asgardians debate his worthiness and next steps. Father Odin takes a tough love approach, while mother Freya brings a more gentle touch. But despite his fate, a threat to Earth awakens under the ocean and Thor Odinson, no longer just Thor, must arm himself and face one of his greatest opponents. But, there must always be a Thor! And on the moon someone with a more feminine touch claims Mjolnir.

Let me start with a first impression. Thor Odinson is not going away. He may be missing in action from the Thor title, but he is still a hero. In fact, once he hears of Earth’s need he does abandon his depression, arm himself and go to face the challenge. And even without the hammer he is still an Asgardian with all associated powers. He just may not be able to fly! So, despite the fact that a new Thor will be introduced, the Thor we all know and love is still going to be around.

My second impression is that a gender war is going to be occurring within the Asgardian hierarchy. And it may be about time. We all know that Sif is oneof Asgard’s most formidable warriors but does she receive the respect she deserves? Odin has been gone for a time and the All-Mother has been leading the community. Now that Odin has returned he is attempting to put the woman in her place. And honestly, I like Freya better! She is more balanced. And I believe it is Freya who will be championing this new female Thor. And I am still holding out hope for who I think it might be! And it is not Sif but another female for Aaron’s Thor run.

Jason Aaron has done a great job with Thor. In fact, Original Sin confirmed Aaron as one of my favorite authors! So I am willing to go along with him as he works out this story. I am guessing (or hoping) that female Thor is his story and not a marketing ploy. And as he reacts to criticism in a letters column, it sounds as if this female Thor will allow him to play out the story he wants to tell about worthiness. He can also write stories about Thor Odinson living in a world where he his not worthy! And seriously, he gave artist Russell Dauterman the chance to draw attack sharks! Seriously, who doesn’t want an attack shark!

Thor #1 is a lot of discussion about Thor Odinson with some fighty fighty mixed in, again attack sharks people. The issue is setting us up for something bigger, and Marvel Cinematic Universe fans will find comfort in familiar villains if they are thrown off by a female Thor. It appears the Thor we know will be around while a new Thor finds her stride with Mjolnir at her side. And I look forward to reading this whole arc in the future.