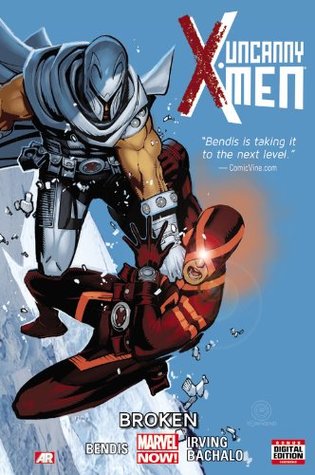 The X-Men are broken!  They have been broken into two team; with the clean cut Cyclops leading the wanted terrorist mutant group and ironically the rough and tough Wolverine leading the socially acceptable Mutants.  And Cyclops, Magik, Magneto, and Emma Frost find their powers broken and uncontrollable.  Can training a new generation of heroes fix the once strong heroes?

As the collections opens Cyclops' team is stuck in hell-like Limbo.  And they are attacked by the demon Dormammu, a situation they are only able to escape if Magik makes a difficult decision to save their young new Mutant charges.  Meanwhile, Director Hill of S.H.I.E.L.D. is done dealing with Mutants after the many frustrations they have given her.  So based on Agent Coulson's suggestion she seeks out a Mutant expert to lead a S.H.I.E.L.D. Mutant task force.  Her choice is the former X-man and Disco Star Dazzler.  One young Mutant Goldballs (yeah) decides he was not made to be a hero and returns home.  He finds out how hard going home again really is.  And as the story ends Cyclops' team is attacked by another Sentinel at a University of Michigan pro-Mutant rally leaving open the question of S.H.I.E.L.D.'s involvement.

Does S.H.I.E.L.D. have an anti-mutant agenda.  Well in the Marvel Cinematic Universe they cannot even say the word!  Director Hill seems sincere when she does not believe that her organization has a secret mutant agenda.  But she makes it very clear she wants to treat mutants just like anyone else who has proven a constant threat to global safety!  She is also frustrated by mutants and wishes to remove herself with the situation.  So she calls on Agent Blaire/Dazzler to become her new liaison with the mutant community.  And since things are still out of control their relationship has a very rocky start.

Agent Coulson is Director Hill's right hand man!  After re-reading Battle Scars I do find this hard to believe since it is Daisy Johnson that brought both Fury Jr. and Coulson into S.H.I.E.L.D..  Along with being a Captain America fan, also shown in Battle Scars to confirm the MCU, Coulson is a Dazzler fan!  I do find some room to doubt both of these revelations despite coming from Coulson's mouth.  And with this story written by Brian Michael Bendis and not someone who has used Coulson in great amounts I wonder if I should just ignore these two new facts.  Hey, it could all be lies!  I do not like the Coulson visual depiction for much of this book, he seems too square to me.

Cyclops and Magneto are worried.  Their powers are completely unpredictable.  And there does seem to be a secret S.H.I.E.L.D. agenda with these mystery Sentinel attacks.  With the lives of young  new Mutants in their hands, they better get fixed fast or Maria Hill is going to catch them before Cyclops' agenda can find a foothold!