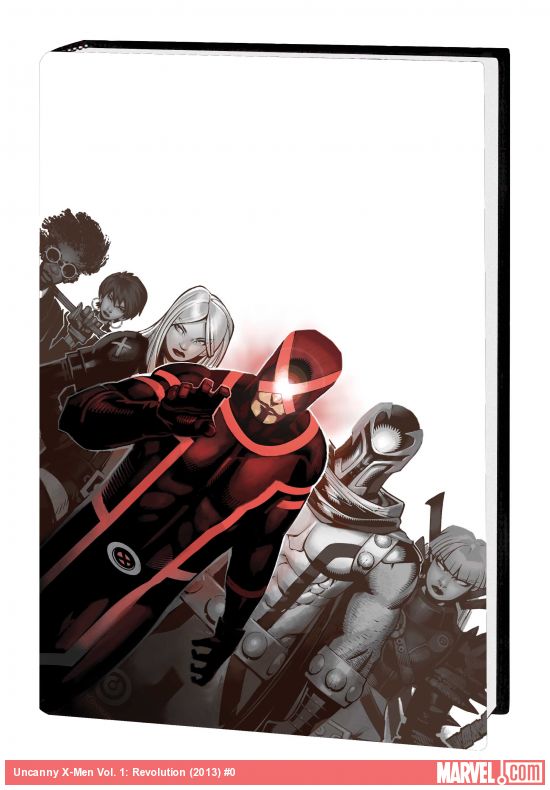 My love of X books is well known. Honestly I read them at this point to provide me some relaxation, away from the hustle and bustle of S.H.I.E.L.D. headquarters. But then yet again proving in Marvel NOW! all stories run through S.H.I.E.L.D., Agents Hill, Fury and Coulson all make appearances in Uncanny X-Men: Revolution.

An informant comes to S.H.I.E.L.D. bringing information about mutant revolutionary and fugitive Scott “Cyclops” Summers. The informant informs Maria Hill that Cyclops’ powers are flicking on and off after his experience with the Phoenix Force. Additionally the informant advises that S.H.I.E.L.D. needs to not chase Cyclops but show the world that Cyclops is in fact a monster, not a revolutionary. Information provided to S.H.I.E.L.D. leads to an X-Men/Avengers confrontation as Cyclops attempts to recruit a student for his new project, the New Charles Xavier School for Mutants. The majority of the rest of the collection focuses around the recently recruited students and Cyclops’ attempt to recruit at the Jean Grey School, as also seen in the All New X-Men. This volume reveals the identity of the shocking student to leave Wolverine’s school.

“Goldballs is not a good mutant name.” No it is not but it stuck in my head. I feel a little junior high as I read that line and I have a feeling this name with stick.

There is a lot of relationship drama in this volume. Cyclops is relying on his ex, Emma Frost, to be his biggest supporter. But after they battled under the Phoenix Force it is not clear if they can ever reconcile. Cyclops also has to balance Magneto who has often been his opponent on the battlefield. And nobody trusts Magik. Throw in the fact that no one’s powers are working correctly and you have an emotional hot mess on your hands.

Uncanny X-Men integrates perfectly with All New X-Men. They share scenes from different perspectives, and actually conclude a storyline from the Wolverine lead storyline. It becomes clear that Brian Michael Bendis is writing these two in tandom and together they make an integrated story. I am in love with All New X-Men, but the title Uncanny X-Men is one of my childhood favorites. But at the moment I prefer All New X-men since I have never been a Cyclops guy and his current turn as a villain is not helping my feelings towards him. If anything I feel like Bendis is showing us Cyclops’s true colors.

So our big three S.H.I.E.L.D. agents are present. They are watching the situation and trying to avoid a global mutant revolution. The informant is offering information if they are willing to follow his plan. And his plan may not be serving S.H.I.E.L.D.’s best interests. The biggest nugget that I took from this volume is despite Daisy Johnson’s mentoring of Fury and Coulson, both are serving key positions loyally to Maria Hill. There is simply no office conflict in this non-S.H.I.E.L.D. title.

Honestly, I do not know what to think yet. I am not a big fan of the new students yet, including Goldballs. But then I am not overly interested in Wolverine’s students either. I honestly could do with fewer new mutants and more traditional X types in both Bendis books as a personal preference.

The X Books have a clear delineation, between schools! The Uncanny X-Men follows the Cyclops lead division, while All New X-Men gives us Wolverine’s side of this schism. I assume that the “Children of the Atom” storyline will bring the two sides of this story back together. I just wonder if S.H.I.E.L.D. will have a roll in that story’s conclusion.