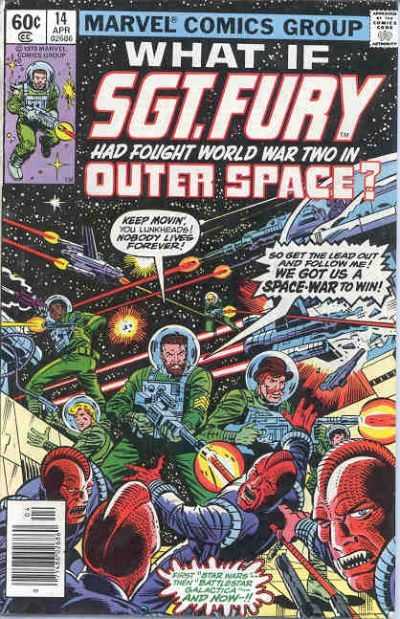 Recently an Agent let us know here at the Hub that they had picked up What If? Volume 1 issue 14, “What If Sgt. Fury Had Fought World War Two in Space?”. There was instant jealousy. Agent Daniel loves space operas and in a former life was a World War II scholar. And this issue was on the rainy day list for Comic Files. But with another agent holding the issue in hand it was time to use technology, Marvel Unlimited, to jump into this story NOW! (wait this was well before that).

It is December 7, 1941, and Nick Fury and his friend Red Hargrove are stationed on Station Pearl. Space is divided into two camps, Alpha and Beta, with Fury serving in the Alpha military. As relations between Alpha and Beta get worse a surprise attack on Station Pearl leads to galactic war. Sergeant Fury is recruited to lead a new commando group, The Howling Commandos. Things are not looking good for the Alpha military in their struggle against the lizard Betas. Everything hangs in the balance around the space station Midway. In the midst of this space naval battle, Fury is called upon to arrest a traitor in the Alpha high command! Will Fury and his men survive or will the Alphas be crushed at Midway.

I love what is going on here plot wise. Though it did take Gary Friedrich for plot, Don Glut for script, Roy Thomas to provide the concept and Jim Shooter to consult. Yeah that is a lot of story guys. Basically they transcribe the early days of World War II into a space opera from Pearl Harbor to Midway. If you get lost, they do describe what is occurring within a parallel Earth, ours, and all from the vantage point of the Watcher. So every event in this space war has a partner during our World War II. The Watcher even goes so far as to explain how this parallel Earth has space age technology in 1941, it is all about Leonardo Da Vinci of course!

The art by Herb Trimpe is clean and clear, with plenty of spacey visuals. This title is from 1979, so it’s understandable with the success of Star Wars in everyone’s minds why these visuals would be appealing and sell comic books, with space battles and space soldiers. There is even a references to “storm troopers” of another kind. The only piece that makes me laugh is the large amount of smoking occurring within the fishbowl space helmets of the Commandos. Yes, Nick gets his cigar in space!

I really love the way the Commandos and their history are treated. Hargrove was at Pearl Harbor in Marvel 616 and motivated Fury’s participation in World War II. We see Howlers who will grow into S.H.I.E.L.D. agents in Dugan and Trip’s grandfather Gabe Jones (totally guessing). And we see a supporting cast with reimagined Howlers like Dino Manelli and Robert “Rebel” Ralston along with Happy Sam Sawyer as Fury’s commander at times. The inclusion of a new commander causes a major concern for Fury, as it would for many soldiers in our world. And finally, the traitor in the Alpha’s midst is someone that Fury has a long history with, as it should be. His accent does give away the secret fairly early.

I loved “What If Sgt. Fury Had Fought World War II in Space?”. It has a story that would have resonated with a late 1970’s audience basically implanting real history into a Star Wars setting…with Nick Fury. I really enjoyed this classic title enough that I have already put two more issues from this series onto the rainy day Comic Files list.