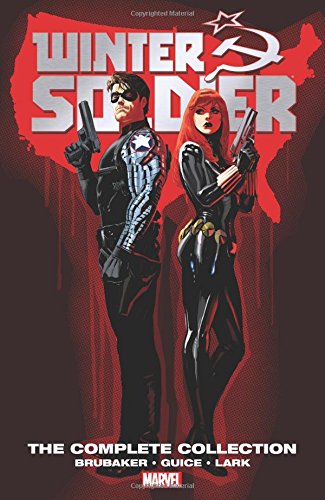 Winter Soldier: The Complete Collection by Ed Brubaker allows Bucky Barnes to be at his best; underground and deadly.  Brubaker provides readers a romantic dynamic for Barnes that they may not have considered.  And readers will be delighted with this action adventure set in a superhero world.

S.H.I.E.L.D. has faked the death of Bucky Barnes, sometimes criminal and sometimes Captain America.  With his good friend dead, Steve Rogers has agreed to take up the mantle of Captain America yet again.  With Bucky now underground he resumes his role as the Winter Solider. Bucky and his girlfriend, Black Widow, work with Agent Sitwell to unearth the sins of Bucky’s past.  And first up on his list of to dos is finding and neutralizing three Soviet sleeper agents (Zephyrs) that he trained to fight like himself.  Bucky faces off against the Red Ghost and his grudge against Doctor Doom…oh and his apes.  But Bucky’s greatest challenge is Leo, who acts and dresses like a dark Bucky.  Leo’s actions will leave casualties and change Bucky’s relationships forever.

Allow me to be blunt.  The Winter Solider and the Black Widow are in love.  And I totally dug it.  I want this in Captain America: Civil War.  To quote a family member, I ship it.  Ed Brubaker presents this relationship as both love and friendship.  He makes me believe that this two have a very long history between mind wipes, so they do not remember every moment.  Best of all, it is a relationship where they are able to show their true selves since frankly they know each other sins.  They are killers, and they do not have to hide it with each other.  Yes, I want this bad in the Marvel Cinematic Universe (MCU).  It is better than Hawkeye and Black Widow could ever possibly be.  We need to make this happen Agents!  Seriously there are some great teamwork and sacrificial love moments that would really enrich the MCU if they could happen.

I really do enjoy this story.  Ed Brubaker knows his Winter Soldier and writes him better than anyone else I have stumbled on.  And the art by Butch Guice and Michael Lark perfectly matches the action adventure vibe of the script.  It is a perfect companion pieces to Captain America: The Winter Soldier comic and a great what if for the MCU.

The opposite of The Winter Soldier is not Captain America, it is the 3rd Zephyr Leo.  Leo does harbor a grudge against Bucky which is not exactly rationale.  I mean really Leo, he was frozen dude.  Bucky trained Leo, so Leo knows all his secrets and all of Bucky’s tactics.  So he really is a match for Bucky.  And at times he is steps ahead of Bucky.  Leo is willing to go to the most intimate places to attack Bucky.  And let me say it, it makes me tense!

Spoilers: I just do not know how many times Agent Sitwell can die.  I am pretty sure I have seen him die three times in the comics and once in the MCU.  So if I had to take a lesson from this fact, Sitwell always comes back.  So we should look for his return with a white hate in Captain America: Civil War.

Winter Soldier: The Complete Collection is a collection that will appeal to MCU fans.  There is plenty of S.H.I.E.L.D.. There is plenty of action and adventure, and some quirkiness too.  But most of all it shows us the possibilities for romance between two perhaps unlikely assassins.