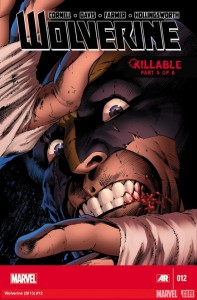 I like Wolverine more than the next guy.  But seriously, can we kill him already!  The fact that Wolverine #12 touts that it is part 5 of 6 in the “Killable” arc is making me relieved that I soon will have a break from non-healing Wolverine.

Wolverine finds himself in a Canadian mall of death being attacked by Hand ninjas.  The non-healing mutant takes several slashes and experiences intense pain as his wounds fester.  Wolverine slashes through the mall as Kitty Pryde attempts to keep the mall police safe.  Elsewhere, S.H.I.E.L.D.'s attempts to control the nano-virus spreading throughout the world being to take a positive turn.  So the nano-virus attacks the hellicarrier with conventional military weapons piloted by infected humans.  In the final sequences Sabertooth finally emerges and we step into the finale.

Yeah, this issue is really a lot of fighting.  And the pain is intense for Logan.  It is Kitty who gives us the commentary.  This is not the first time Wolverine has felt pain.  And her point is he constantly lives in pain, but he has mastered not passing it onto others.  But she fears that the worst kind of pain, self-hatred, is what challenges him now!  Sadly, I just don't feel like this is explored as much as I like because there is a lot of action in the pages to keep the reader engaged.

S.H.I.E.L.D. has all their action condensed into two pages.  That may be more than they got last month!  We learn nothing really new about Fury Jr. and Hill, other than the fact that Fury fights hard!

Next month this story finally ends!  Due to Fury Jr., I have collected all of the first 12 issues of this title.  And honestly as I read this right after Star Wars #12, I just did not find myself as satisfied with where we are a year later as the sci-fi title.  Basically, let us kill Wolverine or heal him because I am done with nano-viruses.