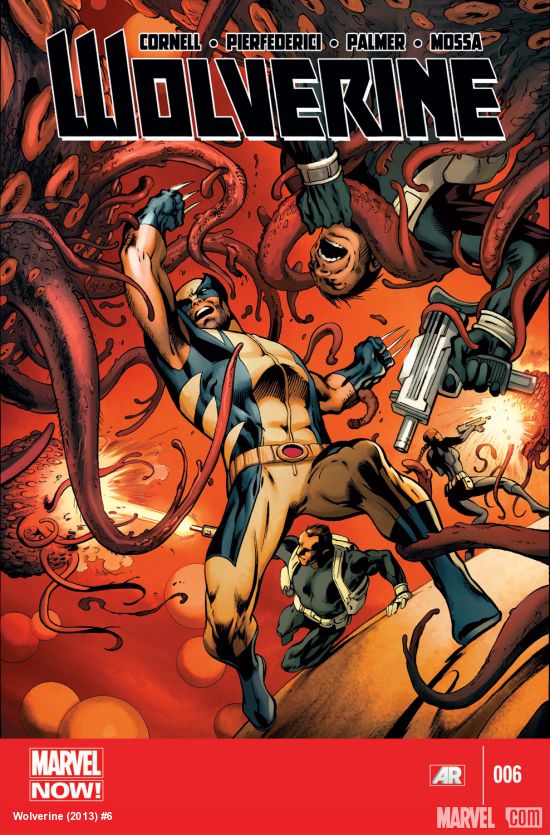 Wolverine is at the bottom of the sea! Logan used drowning to kill his own son Daken. Can the unseen enemy that has taken control of Nick Fury and the helicarrier eliminate Wolverine from the Marvel Universe for all time in Wolverine #6 in the same way?

“Drowning Logan” part two opens with Logan, well drowning. The doors of the Hercules have been opened to the ocean and his unseen nemesis is using the dousing to torture our hero. After whatever is controlling Fury closes the doors, Wolverine and McDougall’s agents seek out the source of control. As they move closer to the finale, they run into and battle S.H.I.E.L.D.’s Team Namor, designed like the Hercules, to battle Atlantis. Wolverine chases his opponent into the Microverse and has a final battle, maybe. The outcome of the fight leaves Wolverine shaken to his core.

Where’s Hank Pym? He is not in Avengers: Age of Ultron or here in the Microverse. Okay, I joke I am not a huge fan of Pym. But the moment we went into the Microverse all I could think of was Pym. Apparently that is where my mind goes when things get small.

So, the S.H.I.E.L.D. agents with Logan all have air tanks. Since the infection that controls the possessed agents is passed through air, couldn’t one of them share a breath with our hero instead of letting his lungs burn as he is held under water beyond his lung capacity? Maybe I am too logical? The infection is carried through the air not water, so could someone just hold their breath for a minute?

The art to me in this issue seems a little rough at times. I have a clear preference for art that is clean and simple, not stylized. So artistic license apparently is completely lost on me and my own personal choices.

I really did enjoy Logan discussing friends like Fury. It is people that makes life for him livable. Otherwise, he would be bored thanks to his near immortality. It is friends that help provide life change and variety, keeping him from being bored. Honestly, is that not how real life works?

I am on the fence. I only truly read three titles every month on a regular basis. So I am ready to quit tracking Wolverine. But with the cliffhanger thrown at us on the last page, well Nick Fury Jr. could be needed to help resolve Logan’s next problem! And so be prepared next month for an update on the latest issue! But I think I will skim it on the newsstand before buying it blindly.