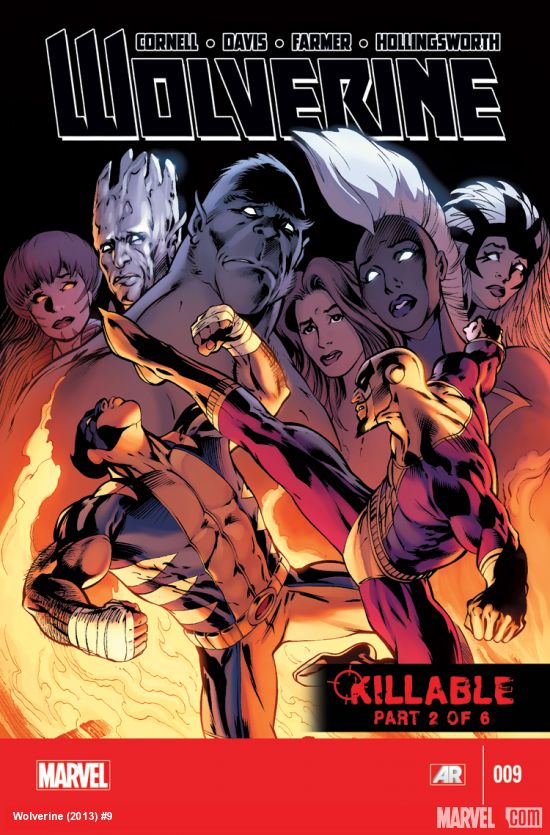 Wolverine #9 shows Logan as he returns to the Jean Grey School. He investigates why Mystique invaded the school and deciphers an invitation left behind. And Wolverine discovers in his killable form that he is now the target of super villains.

Wolverine returns home to discover that Mystique’s incursion into the Jean Grey School was deeply personal. Only one item is missing and we discover that it is one with significance for our hero. Wolverine is also faced with a mysterious invite which takes him away from the school. While on his journey is he confronted by Batroc the Leaper, who actually provides a challenge to the wounded Wolverine. Meanwhile, S.H.I.E.L.D. negotiates with the Host for help fighting the nanovirus.

There is plenty of S.H.I.E.L.D. talky talk in this issue. There are several pages which focus on Fury and Hill and their handling of The Host, who is not a people person. I would say there are at least three Wolverine free pages if not more set on the helicarrier that The Host is being held captive on. But other than the fact that Fury continues to follow orders and work with Hill even though he is Johnson’s man, we do not get a whole lot of new.

For Wolverine, we do see a story that expands on his past as we learn about the missing object. And it confirms that Logan can still be rash and jump into the fray with full abandon despite his weakness. But otherwise, this seems like a bridge in this multiple part story as he moves to confront The Thirteen Ninja (makes everything better) and their unspoken ally.

In Wolverine #9 we have a bridge into future action as Wolverine finds out what Mystique wanted and who he will fight in future issues. Meanwhile it is Fury and Hill who are seeking to confront the nanovirus and find the cure to Logan’s inability to heal.