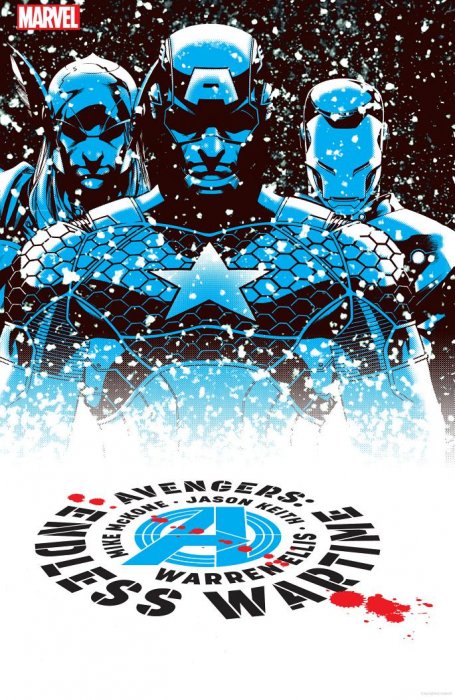 Marvel has positioned Avengers: Endless Wartime written by Warren Ellis and illustrated by Mike McKone as an event book. The title serves as Marvel’s first original graphic novel. Additionally, with a foreword by Clark Gregg and publicity mentions of the Marvel Cinematic Universe, they want us to remember the movies. Would Avengers: Endless Wartime live up to being a Marvel milestone? And is this a title that MCU fans will enjoy?

In Tblunka, Slorenia, mercenaries fight against government forces backed by the United States government. One mercenary brings down an unusual looking U.S. Air Force drone. Upon seeing the drone, Captain America is reminded of a World War II mission in which he attempted to destroy Nazi wunderwaffe, wonder weapons, on the island of Skrekklandet, Norway, the home of the arms foundry which manufactured the drone. It is quickly discovered that the island is also related to Thor and one of his greatest shames when he entered a berserker rage while fighting the Nidhogg, a demon beast which escaped from the roots of the World Tree. The Avengers under Captain America’s command travel from Slorenia, to a S.H.I.E.L.D. base in New Jersey and to Norway to uncover the connection between the drones, or Ice Harriers, and the Nidhogg. Along with fighting demons from another world, Captain America, Thor and Wolverine grapple with what it means to be a warrior.

For fans of the MCU, the foreword is a treat. In these two pages Gregg discusses his childhood love of comics, getting cast in Iron Man and how the film helped rekindle his childhood love of superheroes. Gregg’s story is one that is probably familiar to many MCU fans. Many of us came to love comics as a child but walked away as life got in the way of this silly titles. However, the MCU has for many rekindle that enjoyment, including me. Often we say that Agent Coulson is us and we are Coulson. If that’s not true, Clark Gregg could easily be us instead, since his fanboy appreciation of heroes is clear. I think we all hope that a little bit of Clark Gregg is in the character of Coulson, especially since he has been the actor who helped create the character. This forward only reinforces this thought. Sadly, Coulson is not in this story and S.H.I.E.L.D.’s loyalties are in question.

The next question for MCU fans is will I find something in this book for me? The answer is mixed. The story features Iron Man, Thor and Captain America heavily. And Black Widow and Hawkeye are also part of the story. So MCU fans will be familiar with the cast of characters. And in general they are the characters MCU fans know with Captain America as a Boy Scout and Iron Man providing plenty of sarcasm. But with Hawkeye cracking inappropriate jokes, Banner working as a S.H.I.E.L.D. agent, and Wolverine on the roster (along with Captain Marvel), this team is closer to the Marvel mainstream comic universe in Marvel 616 than the MCU. The story elements that have been pulled over honestly should not cause MCU fans a major distraction for those that have been in the MCU. But the addition of Wolverine, who cannot appear in the MCU, makes it clear to the MCU fan this is not your universe. So despite marketing messages, this is clearly not a MCU story.

Is this story a major milestone for Marvel? The story is short at around 120 pages. And it is an action packed story with at least three set piece battles in different settings. And action really is what the story flows around, much like The Avengers. The purpose of dialogue typically is to move us to the next fight scene. The story does not in my opinion serve as a game changer for either the MCU or the 616. And I do not feel it adds to the mythos of either. The first graphic novel I ever read was Batman: The Killing Joke which created a ripple in the DC universe and is still applauded over two decades ever as a masterpiece. For me that should be the goal of a milestone book. I feel like Ellis wrote a good story, an interesting story but not a milestone story. This story easily could have been transplanted into The Avengers comic as a 4 to 5 part arc easily. Yes, my expectations were too high and it’s not fair to compare Avengers: Endless Wartime to one of the greatest comic stories of all time. But still I still think this could have been introduced first in single issues and then collected. Honestly, I think Thor God of Thunder: The God Butcher and Captain America: Castaway in Dimension Z would have been stronger candidates for an original graphic novel.

The Ice Harriers are an interesting villain. They combine technology and biological elements. And their history with heroes has made them pre-programmed to counter the Earth’s Mightiest Heroes. They are difficult to define as good or bad, since in many ways they are tools used by others.

Being a Wolverine fan I also found his use in the story very interesting. Captain America defines Wolverine as a killer. But Logan notes that Cap has killed in battle himself. One must wonder where is the line? And Thor also is contrasted as a hunter with Wolverine? One is more ruthless, but perhaps that ruthlessness is desire to complete the task correctly. Honestly, as a Wolverine fan I think Logan has a good showing in this story. And Captain America comes off a little bit hypocritical. But again, his presence makes it clear this is not a MCU story.

Avengers: Endless Wartime is a good story. But it is not a milestone. I hope that Marvel continues to build their original graphic novel line, especially as a way to bring MCU fans into comics. But I would like to see a writer like Warren Ellis craft for this line a story that gets everyone talking! And I would love to see an original MCU comic tale in this format. Who knows, maybe as they grow this line I will get what I hope for!