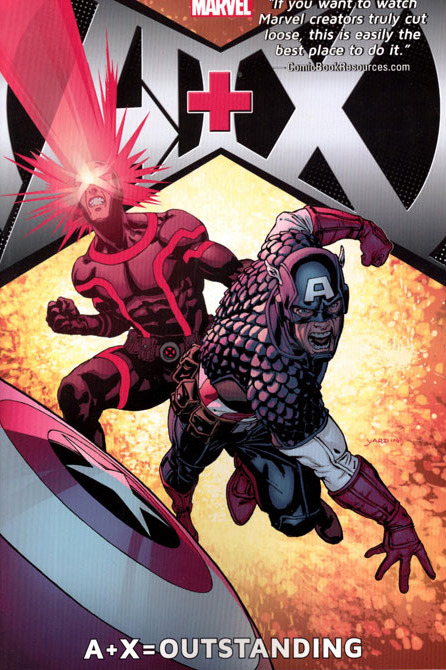 I read a lot of comics. And one of my goals is to read all of the Marvel NOW! titles so I have sampled the anthology series A+X combining a Avenger with a mutant but never found it comic file worthy. But then they had to go and add Agent Adsit!

This is an anthology series of short stories that one may or may not consider canon. In A+X + Outstanding they try something new with a longer form story that combines Captain America with the renegade fugitive Cyclops. The two must face off against a Skrull threat to the Earth were they can only trust each other though they do not trust each other.   To face off with this threat, the two call in X-Men, Avengers and S.H.I.E.L.D.. In the first short story, Black Widow and Emma Frost attempt to recover a video showing questionable behavior being used to blackmail Frost. Then Magneto and the Superior Spider-Man combine forces to rescue a kidnapped teen from A.I.M..  Doctor Stranger and Beast investigate a strange phenomenon and argue about science versus magic. And the Amazing Spider-Man discovers Psylocke on a mission gone bad. Brood follows Tony Stark on a very busy job shadowing day. Finally, Vision and Kitty Pryde fight without the ability to become intangible in Murderworld.

The Captain America and Cyclops team-up is a huge win in this series. It addresses Cyclops’ fugitive status as a murderer and allows Cap to keep his moral high ground. But the best part of the story is it is funny. Captain America explains the value of identification cards to Cyclops. And we get to participate in a debate about Deadpool’s status or non-status as a X-Men member. Part of me wishes Kevin Fiege could stage the same debate so we can get the Merc with a Mouth into the Marvel Cinematic Universe. It succeeds because like the MCR it brings us levity in a tense situation. The story is funny because Deadpool co-writer Gerry Duggan crafted this tale.

And being a Duggan story we do get some nice funny S.H.I.E.L.D. references. Captain America uses a Las Vegas S.H.I.E.L.D. base for his headquarters. The staff consists of one Life Model Decoy (L.M.D.) who wears his title across his chest. Luckily for you and me they explain why! Second, Agent Adsit is included. Though this is not the efficient Adsit I am used to. This one makes a serious yet funny misstep. I do not believe that Phil would be very happy with his bad judgment. But he also shares the secret of making it to Level Six!

The Frost and Black Widow story is written and drawn by Howard Chaykin. If Duggan provides the right over the top for me, Chaykin goes in the other direction. We do get to see Agent Hill provide assistance to Frost, a wanted fugitive. And that felt a little weird to me. But then again we are not to question if these stories are canon and where they fit into the Marvel 616.

The other story I found the most interesting is Brood following around Tony Stark. Stark to start has no use for the alien kid. But Brood proves his worth and in the end, like Harley, I feel they two are connected. But some of the others falter for me, for example I do not really understand the purpose of the Spider-Man non-story.

This is the end of A +X. And I do believe with Duggan’s story it goes out on a high point. With its short stories it was a title that had to fight to find an audience. But it did allow them to take some risks that cannot happen in other Marvel titles. A + X = Outstanding gave us some laughs and some S.H.I.E.L.D.y goodness as the title took its final bow!