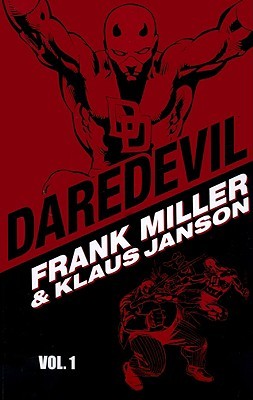 The transmissions were shooting back and forth between the Butcher and Avery hubs.  Agent Daniel was attempting to cram on Daredevil with the Netlix series on the way.  Daredevil has never really been a hero that Agent Daniel has briefed himself deeply on and he looked to change that.  At one point as he was reading Daredevil By Frank Miller & Klaus Janson Vol. 1 he asked Agent Ben if the volume should be a Comic File.  Agent Ben said, “Well, it is a pretty key work!”  And with that small message Agent Ben created more work for Agent Daniel, and surely laughed manically!

The story opens with a Spider-Man story drawn by Frank Miller.  Spider-Man becomes blind at the hands of a villain and Daredevil attempts to help him overcome his disability without revealing his own blindness.  Then the volume showcases Miller’s work in Daredevil starting with DD’s confrontation with Death-Stalker.  Then Bullseye kidnaps Matt Murdock’s girlfriend Black Widow, using the heroine as a weapon against Daredevil.  Next, Daredevil attempts to help Hulk calm down and allow Bruce Banner to escape the stresses of New York City.  Murdock’s partner Foggy Nelson gets married, but will Matt Murdock make the wedding?  And finally three key figures all arrive in New York.  Matt’s college girlfriend Elektra returns to his life as a bounty hunter/assassin.  Bullseye is freed from a mental hospital and resumes his work as a hit man.  And the Kingpin unretires from his life of crime to resume his control over his criminal empire.

It is true confession time.  Let me say my peace and I will duck so you can pelt me with rotten fruit.  I am really not a huge fan of Frank Miller.  And this volume did not win me over.  I found the stories okay.  They are his first real significant Marvel work and it does seem like the work of a young artist and author.  Some of his images seem really simple and lack depth, I have an Elektra image in my mind that underwhelmed me.  I really do not see what took America by storm decades ago and moved Daredevil from an every-other month to monthly title.  Now to be fair part of his could be due to my lack of enthusiasm about Daredevil the hero.  I want to be won over and maybe Netflix can do it for me.  But really I did not find myself entranced by Miller’s work.

What can we learn for Netflix?  First, Matt gives up his secret identity way too easy.  Seriously way too many people, including Elektra who we would label bad, knows what he does at night.  Second, Matt fills his life with stupid people.  And this is more than just Foggy who Miller and company portray as a fool.  And I am guessing on Netflix Foggy will bring the comedy relief.  Here is a great example of stupid people or sloppy writing.  Daredevil is sent to the hospital where the medical staff never remove his cowl.  There is nothing as silly as seeing Daredevil in a hospital gown and hood.  And he is in the hospital for a significant passage of time.  Yet, not even Foggy who has to cover the practice really questions where Matt has been.  Third, Matt likes the ladies and the ladies like him.  You know what would be cool, a Black Widow appearance where we actually see sparks fly.  But do not worry Widow fans because in Matt’s life he moves from relationship to relationship quickly.  So Natasha has no really worry of getting attached. And finally, superheroes walk in and out of DD’s life.  One frame in the hospital includes Iron Fist and Luke Cage.  Yes, these characters have history and it should be easy to integrate them on Netflix.

See, I really do not like Matt Murdock and again that does not help. As mentioned he has disposable romances.  And he also has questionable morals.  Yes in this volume he seemed obsessed with bringing forth justice as defined by the legal system.  But he is a vigilante, and by name does that not break laws in itself?  And at one point they say he does not kill.  But I am pretty sure he let at least one-person die.  Perhaps the issue is I have not seen him function well as a fully formed character.

Now we do not see Elektra’s name on IMDB.  And I am okay with that.  This volume only really includes one story with the Greek assassin.  And a big portion of her appearance includes her back-story romance with Matt.  The character that I am hoping is being hidden from us on IMDB is Bullseye.  Now part of this is the fact that he appears heavily in this volume.  But he really does seem like a strong counter to Daredevil.  And I think it can be pulled off successfully.

Well, I hope that Agent Ben is satisfied.  I really do want to find Daredevil stories that I really enjoy. But Daredevil By Frank Miller & Klaus Janson Vol. 1 is not that volume.  But rest assured there are other volumes on my reading list and perhaps I will uncover a creator and arc that I will enjoy.