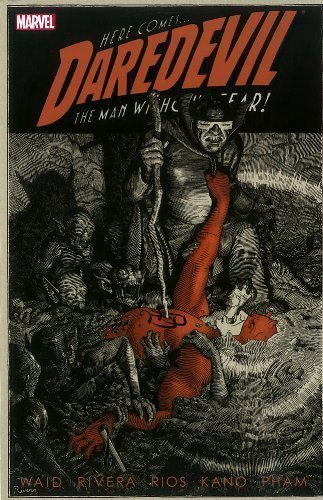 Yes, I found a flavor of Daredevil that I enjoy! It took long enough! So with my taste for Daredevil dialed in I jumped straight into Daredevil by Mark Waid Volume 2 hoping that I would continue to enjoy this take on the man without fear.

The volume starts out as Matt Murdock leads a field trip during Christmas for troubled kids at a blind school. There is an accident in a blizzard and Murdock must teach the youngsters how to live without fear. Then Daredevil and Spider-Man team-up to uncover who has framed Black Cat for a science theft. While trying to help the cat burgler avoid jail time, the horned one and the cat strike up a romance. Afterwards, someone is stealing bodies from a cemetery through underground tunnels. Daredevil chases the coffins, with one containing his father’s body. Daredevil in his pursuit comes face to face with the Mole Man. Throughout the issue Megacrime keeps Murdock under watch so they can steal back their greatest secrets.

I wonder how we will feel about Netflix Matt Murdock. This Murdock is a little bit of a player when it comes to the ladies. And he is shocked when he finds one lady he does not automatically trust; yet he feels comfortable making out with her. Even his best friend thinks he is a jerk, Foggy notes that Matt is very self-centered! Despite being a justice loving crime fighter, sometimes a problem is not a problem until it impacts Matt directly. A good example of this is the disappearing coffins which he only becomes concerned with once his father’s is taken. Therefore, if this continues with Netflix, we can assume that his grudge against Kingpin is very personal.

Daredevil hates team-ups with Spider-Man. Spidey talks too much. Really Daredevil’s hypersenses are his weaknesses. Daredevil can be thrown off by excessive sound and smell. And overpowering smells can make him sick and useless. There is also a scene that leads me to question if his radar sense is also accurate all the time. If the Netflix team is smart, which I think they are, they will continue to play up this weakness much like we saw in The Trial of the Incredible Hulk.

In this volume, Murdock continues to claim he is not Daredevil. It does not help when other superheroes show up and yell things like, “Hey Daredevil!” But Matt has a theory. 1/3rd of the people cannot believe a blind man is Daredevil. 1/3rd of the people believe this the lawyer is the hero. Finally, 1/3rd wonder what is going on with the Kardashians. With statistics like these, he does not worry much about his identity; nothing will make the situation better or worse.

In this volume the law piece is played down. Foggy is barely present. We only see one client all volume. Really, I will admit I kind of miss this. The cases are replaced by massive fighty fighty as Daredevil takes on Mole Man and other villains. But I think I may have preferred it more when there was more lawyering more and less punching.

I promise, I am still with this Waid version of Daredevil. The second volume was not as good as the first for me. But this offering focuses more on the hitting and less on the people, which is why my interest may have dropped some. Daredevil by Mark Waid Volume 2 is still an interesting and fun read though with character lessons that Daredevil on Netflix could learn from. So I guess I will just have to jump into the next volume and continue forth…I just hope my senses take me to a good place.