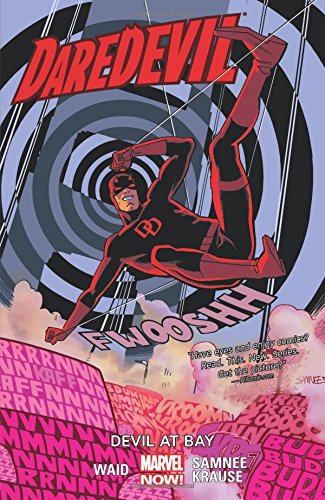 Maybe if I click my shoes three times I will find the Daredevil title that I love. I have heard a lot of good things about Mark Waid’s run with the hero. So with Daredevil: Devil at Bay serving as a Marvel NOW! jump on point it seemed like a good volume to try my next favorite Netflix hero.

My chief question when reading a Daredevil story is what can Netflix learn from this tale? The bad news for this volume is the answer is not much. The story is set in the wrong city. Kristen is not a supporting cast member, and Foggy is really the only one who is in this Marvel NOW! version and Netflix. And we can probably assume he is alive when Netflix starts. Additionally, this is a mostly public hero like MCU Iron Man not the masked man of streaming. So to be blunt, there are not enough hints of what is to come to really get me super interested. This story and the Marvel Cinematic Universe just simply are not connected.

For a deceased person, Foggy Nelson has a lot of moments in this story.

There is one potential MCU linkage to keep track of. The Shroud used to be a respected hero. But now he is a broken and twisted shadow of what he was…why? The answer is he got caught on the wrong side of Civil War. Could we see him in a future MCU movie as a man who is broken by the conflict? It is probably not likely, but we have to remember that even if the MCU Civil War is resolved in 150 minutes or less there should still be repercussions to the event.

I have heard a lot about Mark Waid’s Daredevil work. And sadly this is not my jam. I much prefer Waid’s small body of work on S.H.I.E.L.D. to this. I think my essential problem is simply Daredevil and I do not click. So agents, do feel free to let me know what I am missing.

Another attempt to connect with Daredevil has failed. At this moment my Daredevil is really Rex Smith! I will try again as the clock counts down to binging! But I really do not want to pessimistic about Daredevil anymore.