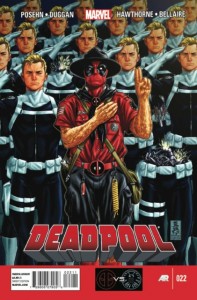 I cannot hold it back anymore!  I have to tell you!  It was Coulson, the retracted name from Issue #21 was Agent Coulson!  Coulson and Deadpool, it is Coulson and Deadpool!  Have I died and gone to heaven?  Seriously someone pinch me…OW, that was way too hard!

The story is a pretty straight forward tale of boy meets LMD.  LMD tried to kill boy.  And then after the awkward moment when the family of the dead lady S.H.I.E.L.D. agent stuck in the boy's head watches the fight with the LMD modeled after her the boy is attacked by mercenaries trying to collect a big bounty offered by a crooked moustached S.H.I.E.L.D. agent!  Yeah straightforward!  Was that a run on sentence?  Deadpool after a LMD attacks him is told by Agent Coulson how Agent Gorman swindled him out of his “Sweet. Filthy. Monies.”  Agent Coulson, Agent Adsit and Deadpool (with Agent Preston sharing his body) team-up to chase down Agent Gorman.  And when they find him they discover just how bad Gorman is.  And oh, it is bad!

I love Deadpool, but I have not been following Deadpool monthly because I was trying to limit to monthly buys to a sensible number like a handful.  Now, I am questioning that decision because this series have been two for two in the happy column.  It is not like I am going to buy every Deadpool variant cover that Marvel puts on non-Deadpool books so they can make some easy Monies.  Writers Brian Posehn and Gerry Duggan write witty dialog (more on that later), I have enjoyed Mike Hawthrone's art yet again, and Mark Brooks for two months in a row hits a home run with his cover.  Seriously, how can you not love a Pool Scout (my term) standing in a sea of S.H.I.E.L.D. jumpsuits.

Yes, Coulson is in the house.  And as you know with Secret Avengers my biggest concern is do they have the Clark Gregg Coulson in the title.  Posehn and Duggan have nailed our Coulson early.  I can really see him deadpanning some of these lines, and us chuckling in a theater.  These two Deadpool issues have been my favorite comic depictions of Coulson to date.  The MCU Coulson can battle wits with Tony Stark and come out on top, just like this comic Coulson can take on Deadpool (the king of jokers) and walk away the quip winner.

Speaking of Coulson, I really enjoyed Deadpool's reaction to him, both of them.  Deadpool has a reaction to Coulson as he learns of his senior S.H.I.E.L.D. agent who is attempting to recover his money that Gorman has withheld.  This reaction gave me the warm and fuzzies.  Deadpool also reacts when he meets our suited agent, and it led to a nice little laugh on my part.  I really enjoy this Coulson/Deadpool pairing.

There is only one thing that raised my eyebrows in the depiction of Coulson.  Agent Preston refers to his as a living S.H.I.E.L.D. legend.  Now her ability to call Coulson by his first name does show me she knows a lot about Phil (do I have permission).  And she may have a lot of respect for him.  And the MCU Coulson has clearly been setup as a prominent legendary agent.  But I don't know if we could really call the Marvel 616 Phil “Cheese” Coulson a living legend.  In comics, just 13 months ago Hawkeye was introduced to him and his buddy Agent Fury (Jr.) for the first time.  And other than the Infinity tie-in issues of Secret Avengers, well he has mostly been on the sidelines.  There is more Coulson action in this issue of Deadpool than at least 10 of 13 issues of Secret Avengers.  Yes, I think he is legendary, but I do not think Preston needs to share my opinion.  Of course, in my mind I just see this as a line of respect for our Level 7 Hero.  And this team is really helping build that legendary image with Action Coulson.

Now a few moments on Agent Scott Adsit.  I really hope that Adsit makes it through this arc.  He has really grown on me and felt an attaboy for Adsit as he has moved from his S.H.I.E.L.D. jumpsuit to a Coulson like suit.  He really is filling the everyman niche, complete with a unhealthly obsession with a Marvel super hero.  Wait is he becoming a Coulson clone?…Stop the presses!  Seriously.  So as I was researching a little bit on Agent Adsit I had a major breakthrough.  Agent Scott Adsit is based on Scott Adsit actor from 30 Rock!  Now I know why he seems so familiar in both look and some of his reaction.  This is fantastic.  Now, how do I make the right friends to get an awkward Agent Daniel into canon?  Or how about we cast Scott Adsit to play Agent Adsit for an episode or two of our favorite show?

And then there was everything I did not tell you about; the action, the very unique karate school in the background, the fantastic return of Crossbones!  Seriously Agents, I think I would jump on this flying car and ride this arc out!