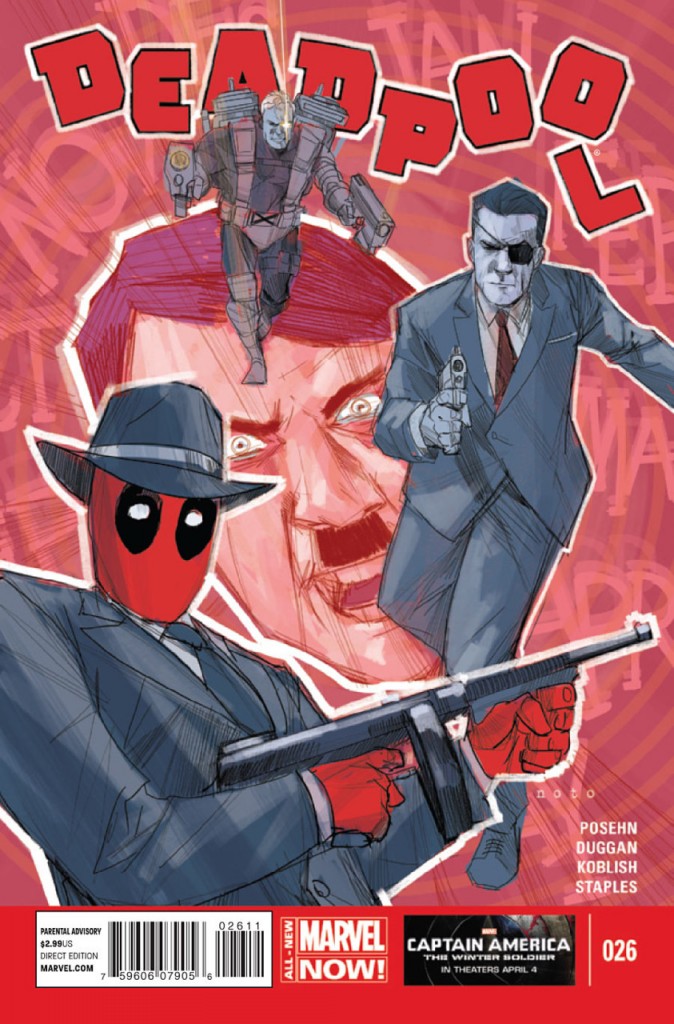 After Deadpool #25 and the end of the S.H.I.E.L.D. storyline I thought I was out of the Deadpool monthly issues despite my love of the merc with a mouth.  Then Marvel gives us an “inventory” Deadpool story with Nick Fury in the 1950s.  And if that does not grab your attention, how about time-traveling Hitler from the team that brought you zombie American presidents!

In 1945 as Nick Fury and his Howling Commandos approach Berlin a time machine falls into the dictator Adolph Hitler’s hands.  With his new toy he has one objective, kill his greatest enemy Nick Fury!  In 1954 Los Angeles, Hitler attempts to kill his prey before he can join S.H.I.E.L.D..  But Fury has been sent a hero from the future to protect him.  No it is not Sarah Connor, it is Deadpool!  The duo fights Hitler and his futuristic robots as they wait for their backup from the future to come and save the day!

The basic conceit of this tale is that it is an unused “inventory” story from the past that was never published because it was so horrible.  The truth of the matter is writers Gerry Dugan and Brian Posehn have been writing a ton and have a big issues coming up next.  So they need to give their art team a break!  What results is a really cool vintage story feel from a time period where Deadpool did not even exist.  Originally I thought I would not enjoy this, but if this team has proven anything they can handle Deadpool in vintage era stories that have cool atmospheres, social commentary and plenty of puns.  I did not want to like this time-traveling Hitler story, but much like their zombie presidents it is bold and brilliant.  And despite every possible historical lie they could throw into the tale it is really interesting.

Hitler expresses a thought that most fans of comics or action movies have considered.  How can like six guys be taking down all my efforts?  Fury and his Howling Commandos are the real reason that Nazi Germany is crumbling.  And this is why Hitler will go to all extremes to get his revenge on the patched one!

Nick Fury is what one would expect.  He is growly and tough.  He lives on purpose and the biggest fear he has a meaningless death.  And in the future Fury chose Deadpool for one reason that he shares with Agent Ben, Deadpool is not his friend.  I really love the time-traveling montage where we find out the name of Fury’s friends when he was a kid.  And Hitler seems very confused in meeting Nick Fury Junior!

As you would expect from a Deadpool story with Adolph Hitler in it, this is not a kid friendly story.  It is brutal and violent.  So keep the kids away.

“Death Comes to Tinseltown or the Last Hitler” is story success.  It is funny, action-packed and has a great vintage feel.  And as surprised as I am saying this, having Deadpool fight Hitler was nowhere as creepy as I thought it might be.