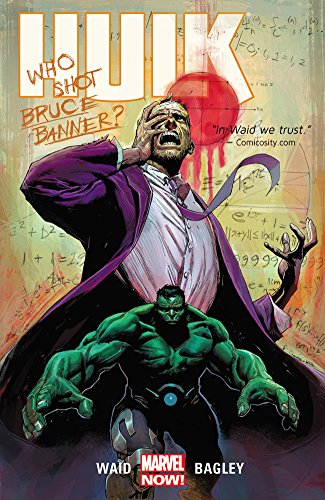 When last we left the Hulk, Bruce Banner had been shot…in the head…with a gun!  Yeah, who knew that could even happen?  Will Mark Waid finally kill off the green Avenger in Hulk: Banner DOA?

Bruce Banner has been shot in the exact place in his skull where he can be incapacitated.  Someone, could it be lanyard wearing S.H.I.E.L.D. agents, is using this opportunity to collect DNA from Bruce Banner while he is in critical condition.  A recovered Banner has extreme brain damage.  And his stolen DNA is being used to reconstruct a monster.  A childlike Banner is monitored by S.H.I.E.L.D. in small-town America as the former genius lives with Grandma and Grandpa.  But the Abomination attacks the family friendly community.  And Banner can only save his friends and fellow Avengers if he transforms into the Hulk, losing his mental capacity forever.  Can Hulk stand against his arch-enemy and what version of Banner will walk away from the conflict?

Level Seven Analysis
There is a lot of finger pointing in this story!  Who broke Bruce Banner!  And most, including the Avengers and Banner’s lawyer Matt Murdock, believe this is the fault of S.H.I.E.L.D. and Maria Hill.  In Hill’s defense, Banner proved to be a valuable asset, one she would not want to lose.  The story itself does not help with blame since the highly trained shooter is clearly in a jumpsuit.  And there is a whole lot of lanyards flying around!  So it is easy to see how Shellhead and Cap would jump to anti-Hill conclusions.

Banner considers a sacrifice.  S.H.I.E.L.D. is attempting to heal Banner’s brain injury.  But with the Hulk’s healing ability a transformation to the green one could make any unhealed damage permanent.  So Banner has to weigh the cost of his power.  An attempt to save those he cares about will lead to him remaining childlike.  Basically there is a heavy price to pay for saving the day…if he chooses!

S.H.I.E.L.D. is very active in this book.  And Hill is really the target of a lot of anger.  Matt Murdock wants to release Banner’s blackmail files for the damage caused to his client.  But Maria begs him not to.  She had no intention of the Hulk being harmed.  And despite S.H.I.E.L.D. being one of our suspects from the shooting, we leave the story unsure still who ordered the hit on Banner.

Hulk: Banner DOA leaves us with many unanswered questions.  Will Banner return to his great intellect?  Who shot the Avenger?  And why is this collection so short, only really 4 issues, without a resolution to this situation?  I am sure in the next Hulk  volume will answer these questions and more!