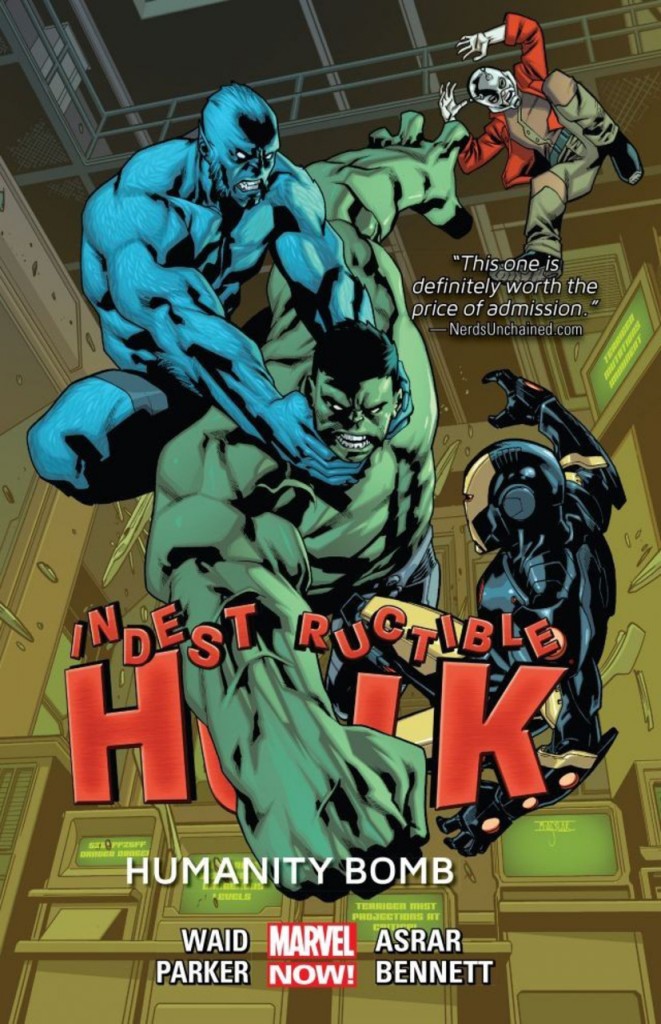 Preamble
Life is tough for Bruce Banner.  There is of course the whole smash thing, but his genius has always been overshadowed by others with more self-control like Tony Stark and Hank Pym.  Okay, maybe self-control means not turning green!  Mark Waid’s Indestructible Hulk: Humanity Bomb puts Bruce Banner under additional pressure as he is marginalized by other geniuses attempting to solve the Terrigen Bomb problem.

The Terrigan Bomb has exploded and Inhuman cocoons are emerging throughout the world as those with the Inhuman gene transform (wow I lifted this line from another review).  The collection opens with Banner needing to smash something, crashing a S.H.I.E.L.D. investigation and Hulking out.  Then Earth’s geniuses attempt to keep all possible Inhumans from being transformed, as some will have negative consequences in their transformation.  To solve this problem, Bruce Banner builds a bomb!  But Hank Pym, Hank McCoy and Tony Stark question Banner’s actions and interfere with Banner’s plans, which leads to a Hulk brawl.  And in the midst of this adventure, one of Banner’s assistants is transformed into an Inhuman.  The main story ends with a massive cliffhanger to get us to the next volume.  The collection ends with a Jeff Parker story where Hulk and Iron Man investigate a former mentor and fights monsters.

Level Seven Analysis
Indestructible Hulk: Humanity Bomb does explore Bruce Banner’s psychology in depth.  First, it is clear that the competition with Tony Stark as seen in Avengers Assemble: Science Bros has a long long history.  And it goes both ways.  Banner as brilliant as he is typically is on the short end of the rivalry.  Going green really interferes with Banner’s plans to better society.  So if he has a good idea, there is a chance that Stark or Pym might also have that concept and beat him to implementation.  It is enough to make one smash.  Second, Banner appears to be obsessed with making bombs.  And his solution to Inhumanity is another bomb.  Stark really questions if he can trust Banner’s bomb since his most famous was the gamma bomb that birthed the Hulk.  Parker’s contribution to the volume also delves into this.  Banner wanted to harness gamma energy to better society and bring a new energy source to man.  But to get the funding he had to rely on military projects for him to better understand gamma energy.  And therefore he built them a bomb.  So perhaps his Inhuman bomb is an attempt to undo the mistakes of his past.  But why a bomb?

We also get glimpses into Stark’s mistrust of Banner.  Can he trust a man who keeps building bombs?  Well why not, Stark used to build bombs!  Can he trust a man with a manic personality?  Well why not, Stark has plenty of addictions and personality issues of his own?  One really gets the sense that maybe Stark does not trust Banner because he is an intellectual rival.  So while Banner is frustrated that no one respects him, the reader gets the sense that maybe Stark is trying to sabotage Banner because Banner is someone who could challenge him.

I do not often get to discuss Jeff Parker, writer of Aquaman over here in MarvelLand.  My biggest take away is Parker really likes to write monsters.  Because really his run on the Sea King has been highlighted by monster fights.  And here with Hulk he delivers more monsters.

We do get some time with Banner’s assistants.  He clearly wants to help all of them with their problems, like Wolman’s terminal illness.  In most cases though they are in the scenery.  And the one that is pushed to the top is Randall Jessup, who is labeled as Banner’s pet.  Why?  Because Jessup is calm and has found an interesting ways to keep Banner calm.  So it does make sense that Jessup is a favorite since Banner can tolerate to spend time with him.

Bruce Banner is a complicated guy.  He is not Bill Bixby complicated, but he has worries.  Hulk smashes, Banner builds is a mission statement he tries to live by.  But often it is not just the Hulk the keeps Banner from having a positive impact on the world.  Banner and his friends do a great job without the big guy in mucking up Banner’s life.