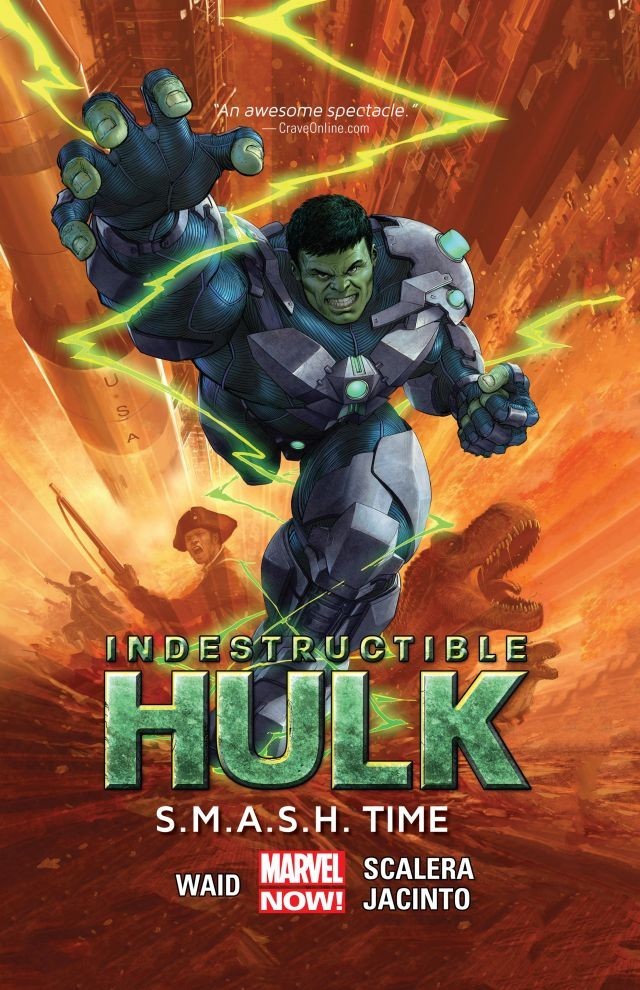 Peanut butter and chocolate is one of the best things in the whole world.  But the idea of the Hulk and time travel almost sounds as tasty?  Would Indestructible Hulk: S.M.A.S.H. Time prove to be delicious?

Time is unraveling and because of someone messing with the timeline people and things are disappearing.  Agent Hill requests that Doctor Banner met her at T.I.M.E. (Temporal Irregularity Management and Eradication) to meet with Zarrko “The Tomorrow Man” a 23rd century criminal who is able to explain why Betty Ross has disappeared from everyone's but Bruce Banner's memory.  A group called the Chronarchists are in the past erasing parts of the Hulk's history.  And only the Hulk can withstand the pressures of time travel to fight these time terrorists.  With a sidekick robot containing Banner's consciousness the duo travel to the old west (complete with dinosaurs), 6th Century England, and the moment of the Hulk's creation at the gamma bomb explosion.  Can Hulk save the timestream and who is behind this sinister plot.

I do have to admit that author Mark Waid shows a great grasp of Marvel history.  The Hulk's adventures in time feature characters that Stan Lee either created or wrote decades earlier.  In the old West, Hulk meets Two-Gun Kid, Kid Colt and Rawhide Kid.  And in the 6th Century he meets the original Black Knight.  It is a really nice addition to see these heroes show up in Marvel NOW! and most of all fighting villains of the like they would have never fought in their heyday.  You really do have to applaud the boldness of bringing these older characters to a modern audience.

The other new thing Waid does is show Banner and Hulk working together.  Hulk cannot transform into Banner or he will die due to the strain of time travel.  So something has to keep him constantly angry.  In this case, Banner's mind inside of a robot.  From Banner's window this is the first time he really gets to watch the Hulk in action firsthand.  And it is an experience that unsettles him at times (despite only being a copy).  You have to appreciate him getting to do some things for the very first time watching Hulk instead of just being Hulk.

S.H.I.E.L.D. has a time travel division!  With all the timeline disruptions in the Marvel NOW! you can understand why Hill has T.I.M.E..  Hill does make a point that Banner should be honored to find out about her small little splinter group, even Stark does not know!  This is a nice shout-out to Indestructible Hulk: Agent of S.H.I.E.L.D. where the Banner/Stark competition is shoved to the surface.  One does get the sense that Banner would feel pride in knowing something that Stark does not.

Where is Banner's team?  Daman Veteri, is the only one present and in a very limited role.  We had foreshadowing that Banner recruited his team for a reason.  But since we do not interact with them it feels like a giant open question is dangling out there.  And I would have honestly rather dug into some of that background instead of just hitting dinosaurs!

Indestructible Hulk: S.M.A.S.H. Time fell a little short for me.  I love time travel and I am okay with the Hulk so I thought I would love the volume.  Instead, it did prove to be a smashing good romp but not really something I find I need to visit again.  Honestly, this was a lot of smashing and I am still wondering about the secrets of his support team which I have hoped would go in some interesting directions.