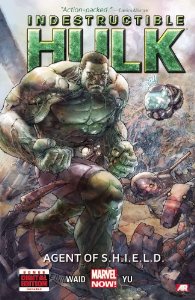 I typically do not read Hulk comics. Honestly, I do not think I have read a Hulk title since high school. But you throw S.H.I.E.L.D. into the title and you can get me to read Indestructible Hulk: Agent of S.H.I.E.L.D..

Bruce Banner has had it with his lifestyle. He has come to realize that the Hulk has no cure. And his life is dominated by the destruction that the Hulk causes, not the innovations Banner could bring to the world. So Dr. Banner decides it is time to change things. He offers the services of the Hulk to Agent Maria Hill of S.H.l.E.L.D. in return for lab resources so Banner can finally use his mind to help the world. He establishes the mission statement of, “Hulk Smashes/Banner Builds.” The issue follows Banner as he and Hill gather his staff, fight the Thinker, A.I.M., an Atlantean warlord and even Tony Stark! Regardless of Banner’s new life plan, Hulk smashes plenty!

Hey Phil Coulson fans, we have an appearance of our favorite hero. Well, we see his dialogue over the phone as he talks to Hill. As I have struggled with finding the MCU Coulson in comics, I do feel like Mark Waid nails the Coulson character in a few lines. This Coulson is the concerned co-worker, who seems to have no agenda as he expresses concern for Hill’s stress mental health. This Coulson could easily be the same guy giving a pep talk to Captain America. Maybe Phil is everyone’s best friend within S.H.I.E.L.D..

Probably one of the biggest questions in this volume is does the Stark/Banner relationship from the MCU continue here. Stark shows up at Banner’s lab worried that Hill is manipulating his buddy. And Stark is shocked to see the new and improved Banner. One of the best lines is Banner looking at Stark and stating, “You wouldn’t like me when I’m happy.” It is clear that Banner is breaking Stark’s image of who he is, unhappy loner. There is also the debate, encouraged by Hill, of Banner’s real motivation. Does Banner want to be Tony Stark? Honestly who would not want to be a “genius, millionaire, playboy, philanthropist?” Maybe Banner does want to be Stark. Maybe Banner is a different kind of genius. Maybe all he wants is the Downey Jr./Ruffalo bromance from the silver screen to hit the pages of his title.

So Banner has a staff. Hill makes sure that they know what they are getting into. Seriously a Hulk-out could occur at any moment. It seems the staff understands the genius of Banner and want to work for him out of personal and professional gain. My real question is which one of them will betray Banner first?

Atlantis is back again as a threat in a S.H.I.E.L.D. book. Seriously is Atlantis going to be the Secret Avengers villain when they take an A.I.M. break? Here we see another helicarrier that has aquatic capabilities. This one is not the Hercules and is built by the Chinese. But here is my question. It was paid for by the Chinese. It is crewed by Chinese nationals. But they have S.H.I.E.L.D. jumpsuits on. So what authority does Hill truly have over these agents from a country that typically does not allow outside interference? And what do the Chinese have against Atlantis?

The Hulk is the newest weapon in the S.H.I.E.L.D. arsenal. He is a canon that Hill can point at problems, but rarely control. Indestructible Hulk: Agent of S.H.I.E.L.D. is a fun book that really works as both a S.H.I.E.L.D. spy story and a super hero story. I look forward to the next volume, and I am a guy who does not read the green Avenger on a regular basis.