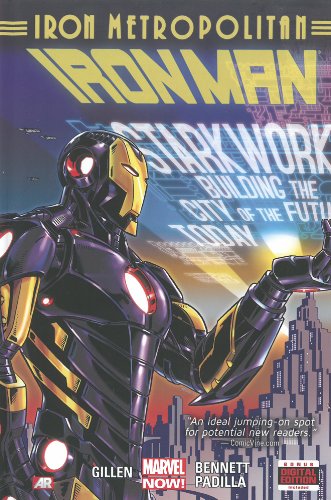 Kieron Gillen told us the secret history of Tony Stark (wow, Marvel NOW! has been giving us a lot of secret history lately).  Iron Man: Iron Metropolitan shows us how Stark reacts to these revelations.  And now that Stark knows the truth, he has plans that go beyond being a superhero.

Tony and Arno Stark are tired.  One has wasted his life on adventuring, the other has been stuck in an iron lung.  The two are determined to make their mark on the work by transforming the world’s cities and reenergize themselves.  It is where the majority of people on the Earth live and they wish to leave a legacy that involves making the world better.  The two choose to redeem the feral Mandarian City, now named Troy.  But they will not be unchallenged.  The 10 rings of the Mandarian are seeking new bearers to take their battle against Stark causing terror in Troy.

This story is a lot of setup.  There is some action, but one feels like more action is coming especially with the cliffhanger.  Part of this setup feeling may be due to the fact the collection includes issues that tie into the Infinity storyline.  Though Gillen makes these issues work for him in his greater story.  But one really does feel like the payoff is coming.

So the Mandarins make humans into Green Lantern like entities.  But unlike the Green Lantern rings they are sentient and fully act on a will of their own.  There is a discussion amongst the rings, yes they speak to each other, about if it’s better to find someone able to wear a ring or find the best person to meet their agenda.  The rings hate status quo, want to destabilize everything and most of all hate Tony Stark.  One wonders if the hatred comes from years of being worn by the Mandarin.  The rings are established firmly to be alien technology and not magical.  And we get names for the rings which highlight some of their abilities, some more transparently than others; Daimoric, Incandescence, The Liar, Lightening, Zero, Nightbringer, Spectral, Spin, Influence, and Remaker.

We do see Tony Stark growing, likely due to having a brother.  He loves Arno, which becomes clear in the story.  And he wants to spend as much time with Arno as possible.  He puts Arno over superheroing, using A.I. to take his place instead of leaving the lab.  And Troy is becoming Tony’s life work since he is building Troy with Arno.  And since Arno is not mobile, and as Arno knows in his current form he appears more super villain than hero.   He is still in hiding.  Arno is quickly becoming the third person in the universe that Tony trusts.  And Tony would rather focus on his relationship with Arno that seeking out his own birth parents!

Honestly, this is not my favorite volume of Gillen’s run on Iron Man.  It is a transition issue as Stark grows now he understands his true parentage.  And it prepares us for a confrontation between Iron Man and a villain trying to control the Ten Rings.  Something big is coming very soon in this title.