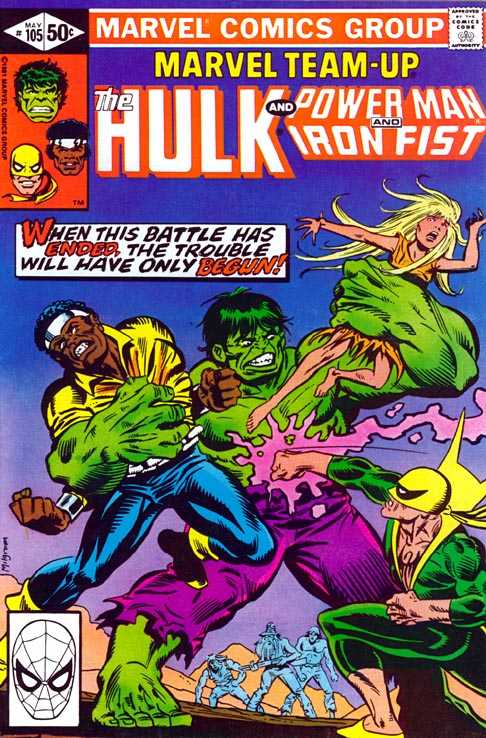 Let us dig into Marvel Team-Up #105 and see what is next for Spider-man.  What, no Spider-Man.  Can I enjoy an entry in this title featuring the stars of the Marvel Cinematic Universe and future Netflix star but no red tights?

In “A Small Circle of Hate” the Hulk is on the run, again, in the American Southwest and he gets spooked as he sees a plane carrying the Heroes for Hire…Hulk is always being chased by planes so they scare Hulk.  On the ground, Luke Cage is captured by a group of Desert People (really you should be thinking hillbillies) who think Power-Man is the Hulk.  And this group needs the power of the Hulk to free their water source.  There is a giant fighty fighty scene spurred by misunderstanding.  In a second tale, “Wolves in Designer Clothing”, one of the desert folk is in New York City with the Heroes for Hire and has to help stop a robbery at a fashion show.

Mike Barr wrote this issue with Carmine Infantino on pencils, Mike Esposito provides inks.  At 50 cents on February 24, 1981 (though May cover dated) this story may not have the value then it does today.  It really is a fighty fighty story with some typical clichés, like Hulk want to be left alone.  But today on the secondary market it is nostalgic fun.  Though in 1981 and today I really do not care about the fashion scene.

The Desert People are full of stereotypes.  And you know that someone in the group has to be a little sinister.  But can we just be blunt, do they really have any chance against Iron Fist, Power-Man or Hulk alone.  So clearly you have to use misunderstanding to get the heroes to fight.

I want more Marvel Team-Up!  I am totally loving these comics from my childhood that I never read.  Though I do wonder if I am more forgiving due to nostalgia and price when compared to modern comics.