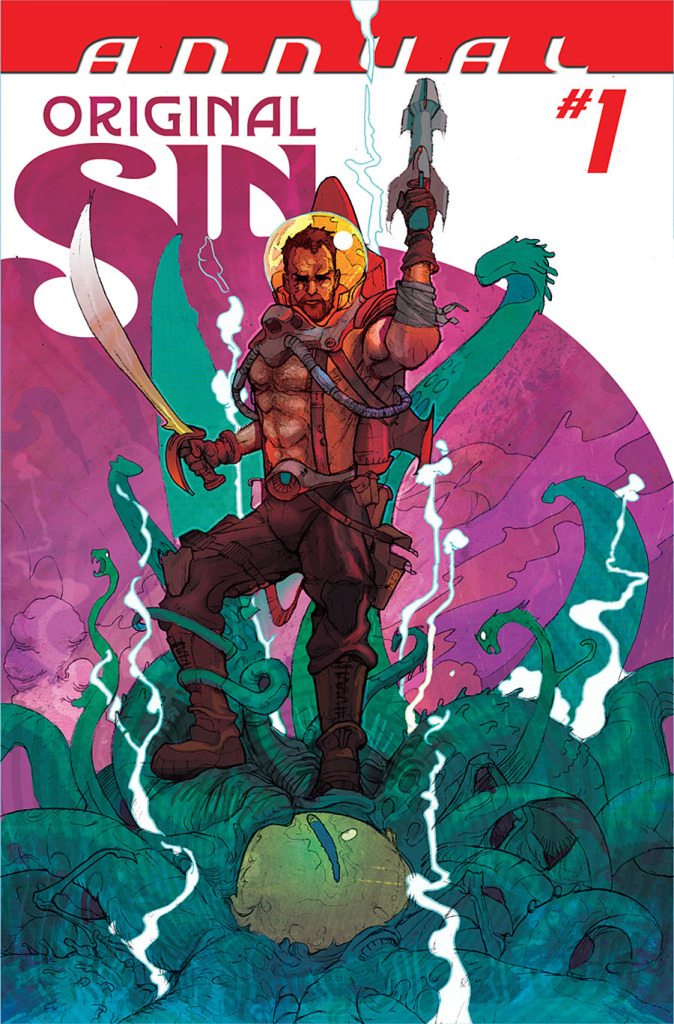 Preamble
It is fair to say that Original Sin left us with a lot of questions.  But one that we thought would be left unanswered was who was the man on the wall before Nick Fury?  Despite Original Sin having concluded, writer Jason Latour and artist Enis Cisic answer that question in Original Sin Annual #1.

Situation Report
The story opens in 1958, when Army Intelligence Officer Nick Fury witnessed Woodward McCord give his life single-handedly defeating the Tribellian invasion of the Earth.  Howard Stark, McCord’s associate, makes an offer to make Fury the new Man on the Wall.  Fury has one requirement before taking the job, since there will never be a public record of who Woodward McCord was he wants to know who the man was.  Stark allows Fury to read McCord’s journey, well at least until he started writing in Kree and other alien languages.  In 1932, McCord’s family was killed by the Entari, a group of alien slavers.  McCord was rescued by Stafford, the last exiting member of the “Men on the Wall” that stopped the 1913 Martian invasion as reported by H.G. Wells.  Impressed with how McCord handled himself, Stafford recruits McCord and teaches him his ways.  McCord’s preparation leads to a final encounter between McCord and Stafford against the Entari, a battle that challenges McCord’s willingness to do what must be done.  The story ends in 1968, with Fury fully established in his role as Earth’s secret protector.

Level Seven Analysis
Is this story about Woodward McCord or Stafford?  The answer is both.  Stafford is the first man on the wall, actually he was part of a group.  But we assume that the others faced dire fates after 1913 and the role transformed to a solitary role under Stafford and passed down to McCord as such.  Honestly, Bucky Barnes’ recruitment of Daisy Johnson honors the Men on the Wall tradition (the Men included Women) where the burden of global defense was a shared responsibility.  But I digress, Stafford teaches McCord that their role is to do that which must be done.  And doing what is necessary is not often the compassionate choice.  The Man on the Wall must do what is best for Earth’s safety, and that could mean compromising values. And as one reads this, it is easy to se how Nick Fury would have gravitated to a role where he must make the hard choices.  One can believe that Fury’s hard edge could easily have been sharpened beginning in 1958.  After decades of making hard choices, yes Fury could have become super cold.

One of the big questions I have gotten is could Woodward McCord be MCUed.  This is a complex question.  Yes, I think he could be MCUed because everything can be MCUed.  If you can MCU the Infinity Gauntlet you can make McCord work.  But, I do not believe I want him to be.  In Marvel 616, McCord is one man with a gun who stops alien invasions!  Honestly, I think that image is bigger than the capabilities of one non-powered human in the MCU.  So I think that the image and impact of McCord would lose weight since he simply cannot do the same things in the MCU as Marvel 616.  Second, I do not really want him to be connected to the very grounded MCU Nick Fury.  The addition of Woodward McCord as a inspiration would make Fury more super and less human.  Though, Avengers does make it clear that Fury is someone defending the Earth from Aliens. So maybe, McCord could have been an early Director of S.H.I.E.L.D. who worked with Peggy and Howard. So yes, I guess I could see this work. I just cannot see McCord in the MCU with a space suit and sniper rifle facing an armada alone.

Art wise I will admit I find the characters a little too buff.  I prefer a little more typical sized Fury, mainly because part of his legend is just being a normal man without a power set.

I think we have bumped into early LMDs before, if not the first one.  This story includes also includes for me an important Life Model Decoy early moment, even if it is just for the plot of Original Sin.

Conclusion
I have been very high on this whole series.  And I was excited about the addition of a Woodward McCord origin.  I do feel this is good background as it appears that McCord will be interacting with Howard Stark and Peggy Carter in 2015.  And we now know who is the man who so impressed Nick Fury that he chose to put himself on the wall.