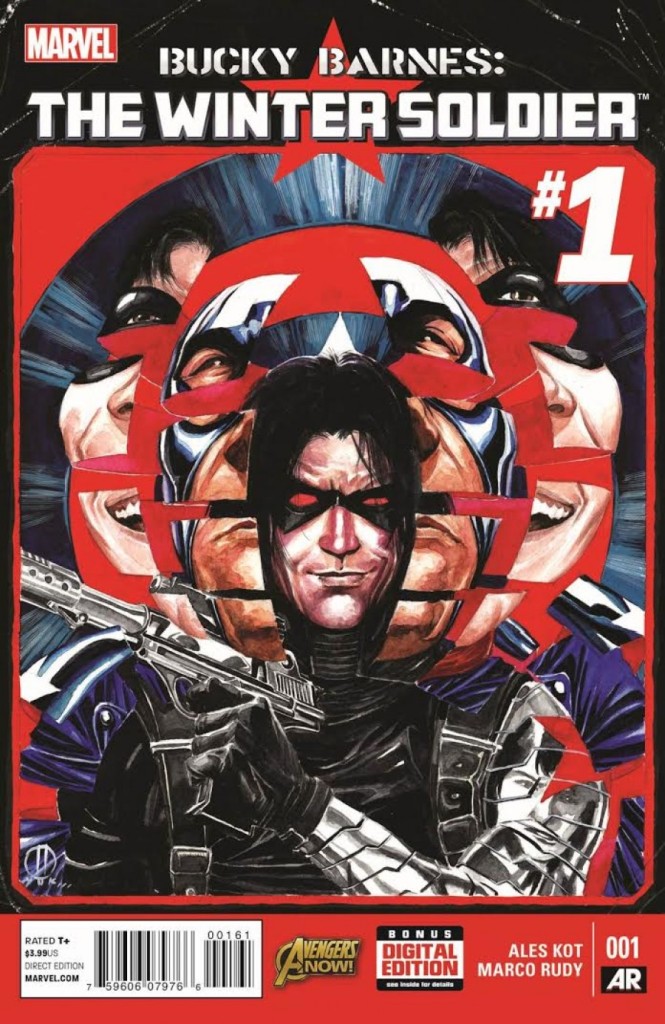 Bucky Barnes the Winter Soldier has a new job! Spinning out of Original Sin, Barnes has taken on the mantle of Nick Fury becoming the man on the wall. He protects Earth from Intergalactic and extradimensional threats…with his gun!

As this episode opens, Bucky Barnes is a prisoner on the world Syro. And he has killing thoughts on his mind, which is not allowed on this far off planet. Killing thoughts are just part of the job when you are a “intergalactic assassin not-for-hire.” As the story unfolds, Bucky makes it clear unlike his predecessor he does not want to be alone. So he recruits Daisy Johnson, a Nick Fury confidant, to help him protect the Earth. After his interplanetary adventure, Bucky works with Namor to fight undersea drug dealers. And the man behind the drugs is a character very familiar to those that love the Marvel Cinematic Universe.

Ales Kot and I have had a love/hate relationship. I do not believe he always gets how to write Agent Coulson. And of course here in the Hub not writing Coulson correctly is a sin. But I do feel like he has begun to get Coulson’s voice, though Coulson is still strangely the best in the pages of Deadpool. And he has turned Secret Avengers into what I want, a giant conspiracy tale. But I think right out of the gate he nails Bucky! This Bucky is grey, dark, determined, ruthless and yet has a compassionate heart! And he is willing to take the place of Nick Fury on the wall. He has taken to the job with the same dedication we saw of Fury in Original Sin.

But Bucky does realize something, Fury was alone (well, technically, he was but he wasn’t) and he cannot do this job solo. So insert applause, Kot brings back Daisy Johnson. I keep asking where Daisy is, and now we know. Kot was there when Daisy stepped out at the end of Secret Avengers volume two and I find it fitting that he brings her back here. And it really helps that Kot helped establish a partnership between the two in that Secret Avengers run. The reasoning for bringing in Daisy also makes perfect sense. She was loyal to Fury and understood how he worked. She will not be afraid to kill. Daisy is many ways is Fury’s legacy and it only is logical that she would help continue his most important mission! And as a secondary companion, Bucky reaches out to Namor and their long legendary history when he needs an under the sea friend! With Daisy back on the page, clearly the next step is a return of Mockingbird!

Marco Rudy is new to me. And usually I really am not a fan of non-photo realistic art, except for a few exceptions. Rudy is now on the list of exceptions. I am using all the wrong terms when I discuss this but Rudy has a dreamlike swirly style that fits Kot’s writing really well. The psychedelic feel starts with Rudy’s cover, a cover that catches the readers notice on the shelf. This is a story that is played out in space and underwater. In the future it could go anywhere. And I feel like Rudy’s style can handle a variety of environments while still being consistent issue to issue. In many ways, the best way to depict fantastical backgrounds is in a dream.

Bucky Barnes has a big job, and he is just a man. He has a gun and he is not afraid to kill to protect our world. In many ways, he is the Batman of Marvel with tools and mission compensating for a lack of powers. Batman has a cave, Bucky has a satellite.

But will I visit the satellite every month? I am conflicted. Bucky Barnes: The Winter Soldier #1 was successfully implemented in my opinion. The story is a good next step after Original Sin. It is better than 90 percent of number one issues on the market today. I guarantee that I will read and review future collections. But without a heavy S.H.I.E.L.D. influence I may wait until the trade comes out.

But I am also open to peer pressure. So make it hard for me to pass by this title Agents!