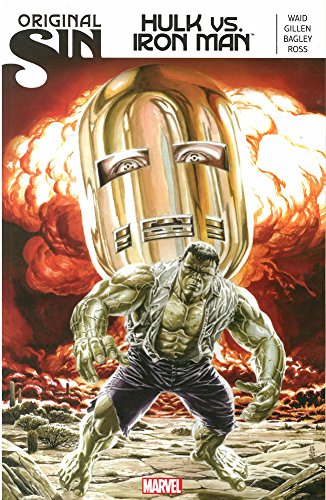 I just cannot get enough Original Sin. But luckily for me there are a few crossover stories I have not dug into yet. These include Mark Waid and Kieron Gillen’s Original Sin: Hulk vs. Iron Man with art by Mark Bagley and Luke Ross. So, Iron Man and Hulk are going to be facing off…what’s the big deal?

The story opens with Hulk and Iron Man in an epic throw-down. We quickly find out the fight was triggered by the Truth Bomb when both heroes remembered something, though incompletely, tied to the origins of the Hulk. Tony Stark was at the creation of the Hulk. And after a fight about the future of gamma radiation between the arms dealer and the idealistic scientist, someone tampered with the gamma bomb. Did this tampering increase the yield of the gamma bomb and turn Banner into the monster he has become? And did the work of someone other than Bruce Banner create the Hulk? We join both heroes as they walk through the past trying to uncover lost memories of what happened that day. What is the truth about the Hulk?

One of the great things that this story does is more fully establish the long history of the Science Bros. And yes, Tony Stark is a horrible horrible friend. Seriously you cannot count on him to watch your house, feed your dog or water your pets. And he may seriously be jealous if you get a great idea, like using gamma radiation a gift for all mankind. In the end his pride just will not allow him to admit that someone else is smarter than him. And honestly, Bruce Banner might just be smarter than him. Though Banner may have something else bigger than Stark too, and I am not talking muscles.

Banner realizes that if he is going to take on Stark he needs Hulk to be smart. So, unknowingly, Arno Stark helps Bruce by injecting Banner with an Extermis mix that allows Hulk to be smart. This Hulk is as smart as Banner, but he is not Banner. And despite his intelligence Hulk still needs to smash. Stark prepared for the battle carefully, but a smart Hulk is something he did not count on.

Here is my fundamental problem. I believe truths from Original Sin should mean something. As I left the story I really questioned if this story meant anything. As I have been listening and reading a lot about Elseworlds and what ifs and how they should mean something a lot lately, this question is one that really left me wondering does this story really matter. The Hulk is still the Hulk. That did not change. Did anything else?

Original Sin: Hulk vs. Iron Man was a fun romp through the past. It is setup though to reveal the truth. And in the end the truth is I just did not love this story as much as the main storyline.