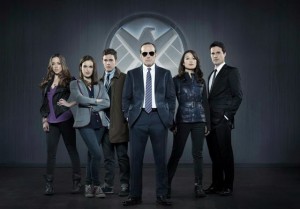 Appropriate that they started with Mike Peterson kicking everything into action, and fitting that they end the season with Mike Peterson. The way they open the series introduces the characters in a perfect order and gives just enough foreshadowing of things. Even things they may not have know they were foreshadowing when they wrote it…like they can't break the encryption on Skye's equipment.

Ward's fight scene gets better every time I see it. Seeing Ward just mosey onto the Bus is now foreboding, and his arguments against being part of this team carry a new weight.

The question is, how much does Coulson know about Skye at this point?

And then Ward is shot with a truth drug? What does he say? He has killed a few people, and he didn't feel good afterward.

Overall, though, the pilot episode has some new subtext considering the revelations at the end of the season, and holds up as a very strong episode of the series.

What about you? Sound off below: what were your first thoughts seeing this episode, and what are your thoughts now, having watched the season from this pilot to the finale?