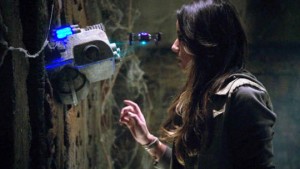 This episode defines 0-8-4's for us. And when Coulson tells Skye what a 0-8-4 is, he says it's “an object of unknown origin, kinda like you.” Again, foreshadowing! Watching the beginning of season one with the knowledge of the end of season one adds a new level of subtext.

What's cool about watching these early episodes is seeing them expand a concept into a universe, and seeing things show up that will be used later on.

It's also nice to see the character feeling each other out and building relationships. Of course, much of what they are learning is LIES and these relationships will be redefined over the course of the season. In some cases, a few times.

This episode is a nice first adventure together. It is the best episode of the season? Of course not! It's a solid second episode, though. It's the team building episode, where they first work together.

Until the rubber raft seals the side of the plane. I don't care about the science — good or bad, realistic or not, it looks terribly unrealistic on the screen.

The final scene, as the team sits and shares a beer, does end up feeling uncomfortable, as we see the wolf in the fold. Our eyes are on Skye, thinking she'll be the one to betray the team. We just think Ward is learning people skills, not plotting how to “hail Hydra” in this unusual and unexpected team placement.

What about you? Does this team building episode have a more sinister tone for you? Sound off below with your memories and new thoughts about this episode!

Next episode: The Asset