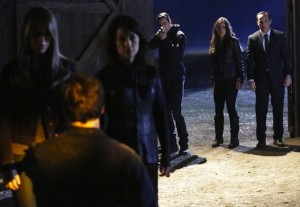 We built a barn set and we're going to use it!

I remember. I remember watching this episode live and going back and forth.

I like FitzSimmons, but the pranking subplot was kinda, well, not engaging. Until Fitz's scream.

I was curious about May and why she was called The Cavalry, and the reveal was given as a joke. Until it wasn't a joke anymore, and it was heart wrenching.

There were some deep themes being touched in this one, with talk about heaven and hell and forgiveness and faith. But it was couched in a story about a man-child who dimension hops and terrorizes old friends and new strangers.

And the big one: this episode is the one that SHOULD have had the previous episode's cold open! This is the episode where you open talking about Thor: The Dark World and the dimension hopping in that movie, and then you have the dimension hopping subplot. There — the main story doesn't HAVE to be tied to an Asgardian artifact, it can simply be the fact that the barrier between worlds was stretched thin, so the particle accelerator accident happened at a Very Bad Time.

Coincidence? Yeah. But it's a more logical coincidence. It feels less coincidental.

Repairs has some great moments, but it's not a great episode. Looking back at all the episodes so far, this may be the worst of the bunch. But even then, I had fun watching it.

And May's smile at the end? Beautiful.

Next episode: The Bridge