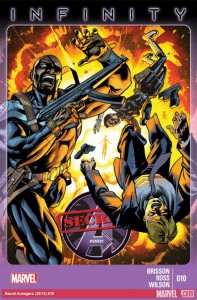 I was being cynical. I walked into my local comic shop, took my copy of Secret Avengers up to the counter and said, “Great, it’s an Infinity tie-in, I’m done with that!” The owner then proceeded to tell me how great the cross-over is and why I should be excited! Honestly, I did not buy it (the sales pitch, I still took my Secret Avengers). After two great issues, making Secret Avengers fit into a tie-in just did not appeal to me.

S.H.I.E.L.D. Agent Sarah Garza sits in her in New York apartment and blows up her building by spontaneous combustion. S.H.I.E.L.D. discovers that the unpowered Garza was recently exposed to the Inhuman Terrigan Mist and was transformed with an explosive new ability. Garza is quickly outfitted and sent into the field to assist Fury and Coulson as they battle Thanos’ forces. She is joined by Iron Patriot in fighting to save our world during the Avengers’ absence. The volume ends on a cliffhanger as another possible new Inhuman emerges.

This issue is written by Ed Brisson, taking Nick Spencer’s place for this arc. I was really worried that this change would be a negative, especially since I had already prejudged the issue. But I do have to say Brisson holds his own. One of my big compliments to Spencer is how successful he has been in writing female characters. Brisson does the same in introducing us to Garza. And this female lead is very different from Hill and Johnson. Garza is new to the superhero game, so as a reader one gets to follow her as she takes her first steps in this world, a world where she is still overwhelmed working side by side with Fury.

After a long absence Coulson and Fury are back. Coulson is in the field again also, wielding weapons and taking out bad guys back-to-back with Fury. And I love it. This Coulson is not the passive office worker. This Coulson is a man of action, much like the one that leaves Ward on the bus while Coulson leaves to face evil himself. Again, this is the Coulson I want to see in the comics. I also love that Coulson, being more experienced around superheroes, insists on trying to help Garza pick up a superhero name. And her reaction is fantastic to Coulson’s help.

I did enjoy this story despite its inclusion in Infinity. The inclusion of Garza adds tension as it gives us a character who may not survive this arc. And the return of Coulson made this fan boy smile!

Sarah Garza, welcome to the world of superheroes. It has been rough, but fortunately with partners like Nick Fury Jr. and Iron Patriot, you just might make it past issue #11. But then again, you might not!