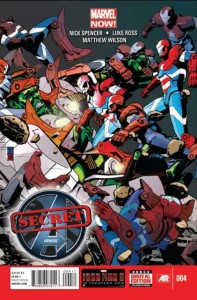 The Secret Avengers continue their struggle against A.I.M., who has turned up this conflict by taking control of the Iron Patriot drones. S.H.I.E.L.D. struggles with how to best answer this threat which could embroil the world into a global war. Can Agent Coulson deliver to S.H.I.E.L.D. the one man who can take control of the situation and eliminate the drone threat in Secret Avengers #4?

A.I.M. has taken control of the Iron Patriot drones, and is directing them against targets on the U.S. watch list. S.H.I.E.L.D. encourages the United States to take credit for these attacks so it appears S.H.I.E.L.D. has not lost control. But as the drones threaten to attack Iran, they fear that a global war could be initiated. Agent Coulson calls on Tony Stark (currently solar systems away) and James Rhodes for information on controlling the drones. And they request the support of Dr. Bruce Banner on how to handle the situation. Agent Hill is forced to put Banner into the field as the Hulk against the drones. In the few frames showing our usual Secret Avenger lineup, Agent Fury leads his team on a stealth attack against A.I.M. Island. The story is full of deception, as the reader knows the true powers behind the actions of the drones and the Hulk.

Where to start, where do we start? Let us start with the main man Agent Coulson. Coulson is not with Fury in the field in Secret Avengers #4. Instead he is back in the role of the team recruiter. He virtually meets Tony Stark through a remote suit. Stark does not have time to consult S.H.I.E.L.D. on the drone issue, but the meeting between Stark and Coulson has a pleasing tone for readings. It almost feels like the Stark/Coulson” keep love alive” discussion, where they are very comfortable with each other. I found that a little strange since they have never met before, but it still felt good. It is Rhodey that Coulson is really at Resilient to see though. And the big surprise is that Colonel Rhodes knows Coulson, as Cheese! So we are beginning to get the feeling that Coulson had already made a reputation as an operator in the Special Forces world. However, there is no payoff to this interaction. We basically get a frame of Rhodes and Coulson with no hints to if War Machine will be in the next issue.

This issue also helps to establish that Agent Hill and not Agent Johnson is fully in charge of the Secret Avengers team. Hill wants Banner to consult; Johnson wants nothing to do with him. The two have clear tension about Hill’s choices for her team within Johnson’s organization. And Hill is quick to point out that Hill’s confirmation hearings have not concluded yet! This clearly foreshadows future tension between these two strong willed women.

For almost this entire issue Fury, Hawkeye and Black Widow are not to be seen. And in their absence Hill and Banner do a good job carrying the book. The majority of the story focuses on the problem of the Iron Patriot fleet, and it is Banner not Fury who faces off against this problem. I did note that they referred to Hulk as the other guy, which fans of the MCU will resonate with.

I really hope the big beats of this arc are not coming to an end. Sure, I would like a Secret Avengers one off story here and there. But overall I am really coming to enjoy the S.H.I.E.L.D. versus A.I.M. tension. So I am hoping when the multi-issue story ends that A.I.M. is picked up again quickly as the big bad for the series. I just hope that the financial desire to collect these issues in a trade, does not give a premature end to A.I.M. in this series. I really would be satisfied if A.I.M. was the big bad for the entire run of this series.