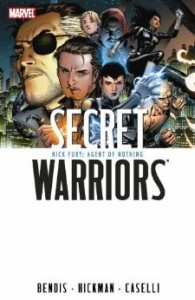 In the wake of Secret Invasion in 2009, Nick Fury was yet again separated from S.H.I.E.L.D.. The superspy was labeled an outlaw and villain Norman Osborn took over Fury’s toys now labeled H.A.M.M.E.R. a more aggressive pose for sure. But despite being “Nick Fury: Agent of Nothing”, Fury still has plenty of time to mentor a new generation of agents, the Secret Warriors including Daisy Johnson, and uncover more secrets in S.H.I.E.L.D.’s past.

As Secret Warriors : Nick Fury Agent of Nothing opens Fury is in hiding. He is living in undocumented S.H.I.E.L.D. bases where he mentors his field team led by Daisy Johnson. The team is predominantly super powered operatives, and not typical non-super S.H.I.E.L.D. agents. Fury is using his team to gather information about HYDRA. But willing to get his own hands dirty, he infiltrates a S.H.I.E.L.D. facility where he discovers a shocking secret. S.H.I.E.L.D. has in fact been an arm of HYDRA, with S.H.I.E.L.D. helping to track and eliminate HYDRA competitors. Finally seeing the full picture Fury attacks the H.A.M.M.E.R. docks in a three way battle between H.A.M.M.E.R., HCPMC (Howling Commandos Private Military Contractors) and the Secret Warriors. Will Fury claim a Helicarrier? And what will his next step be in his battle against HYDRA?

I have to be honest. If you read enough S.H.I.E.L.D. comics Nick Fury begins to seem, well, stupid! The man spent decades of his life working for this one agency that he gives his full allegiance to. And what do we find out as we dig into history. He has worked for a corrupt council that has tried to kill him. Earlier stories explained that there is a link between HYDRA and S.H.I.E.L.D. in the fact that both use technology stolen from aliens. And now we find out S.H.I.E.L.D. is nothing more than an arm from HYDRA! Seriously Nick, you may just want to retire and let someone a little wiser take your job. Baron von Strucker declares at one point, “Oh, Nicholas we’ve been dancing for years and for the first time you’re hearing the music.” It is all true, because Nick Fury has been Agent of HYDRA for a long long time!

It was Daisy Johnson and not Fury that I actually wanted to observe the most in this volume. I have only seen her in Battle Scars and four issues of Secret Avengers (one she was completely absent in). So it was nice to see the younger not in charge future director. I have seen tough and confidant Daisy. This Daisy is still learning, unsure of her leadership and very much a student. She also is very loyal to her teacher, Professor Fury. It is kind of cool to see Daisy in Development, especially since she will share her own mentorship with Nick Fury Jr.

I also really enjoyed HCPMC. This group lead by Dugan is made up of former S.H.I.E.L.D. agents who are now soldiers of fortune, unwilling to work from H.A.M.M.E.R.. It is amazing how loyal this group still is to Fury. They are willing to attack their old bases, which they know are highly defended, and their former colleagues that agreed to work for Osborne. It is also interesting to watch Gabe Jones an original Howling Commando with Dugan and Fury during World War II, who has no fear in questioning Fury’s actions. I guess when you have fifty years of history with someone, you can call them out on their baggage!

After reading this first volume of Secret Warriors I was ready to pick up the next collection. I find the growth of Daisy Johnson, along with her interactions with Fury to be interesting. I am not yet calling this title a must have for S.H.I.E.L.D. fans, but I do want to dig into it a little more.