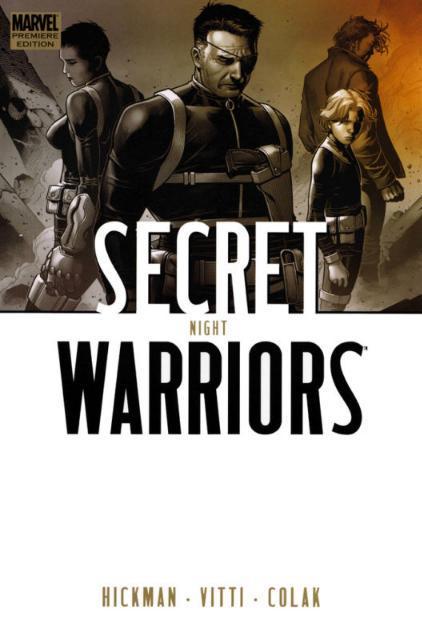 Everybody has bad days. But the last six months for Nick Fury starting with Secret Warriors: The Last Ride of the Howling Commandos has been exceedingly rough. And sadly for good old Nick, Jonathan Hickman is not done ruining his days in Secret Warriors: Night.

Six months have passed since Howling Commandos Private Military Company was shattered by Hydra. And the three way war between Hydra, Leviathan and Fury is escalating out of control. Fury sees the chaos as providing the opportunity to attack Hydra’s Gehenna base with Daisy’s Team White. Fury leads the Secret Warriors into action with a battle that includes Phobos battling against Gorgon’s Godkiller sword and von Strucker taking the field against Fury. The end of the battle leads to Daisy’s team being shattered. This is followed by a short story of Mikel Fury’s recruitment and attack against another Hydra base. The issue ends with Fury facing an unwinnable situation.

Secret Warriors: Night confirmed something. Fury loves Daisy! Oh, do not go there. He loves her like a daughter and he will do anything to protect her, even if it is from herself. When the bad news has to be delivered to Daisy he takes it upon himself to bring the heartbreaking tale. This simple fact makes it even clearer why Fury handpicked Daisy to replace him as Director of S.H.I.E.L.D., even if it did not last!

Phobos shows himself to be more than a kid in this tale. He truly is the God of Fear, Son of War. And while it seems awkward to watch a sword fight between a teenager and a middle aged super human, in the end it pays off well. He really does show how much the youngster had grown.

Garrett, it seems all Garrets like to mentor. In this volume John Garrett takes a young hero aside and trains him. It is not always easy, for the kid. It is definitely never pleasant. Luckily no Buddies were killed in this episode. In many ways Garrett taking on a young protégé says more about Fury and his beliefs in people than in Garrett the teacher.

Secret Warriors: Night ends with my full attention.This volume does really help move forward the macro story and gives us the cliffhanger of cliffhangers. Though this has not been my favorite volume in the series, I am somewhat frustrated that I do not have the next and final volume on hand to finish out this story. Because I really want to see what happens next.