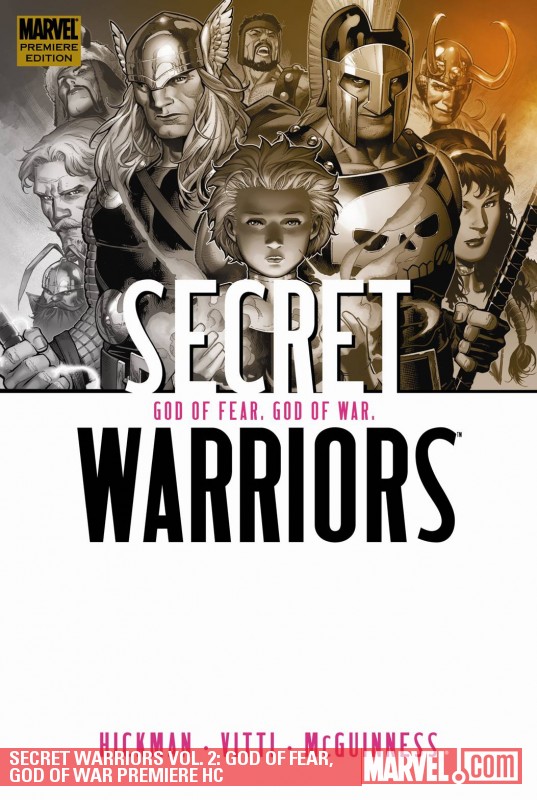 Secret Warriors: Vol. Two God of Fear. God of War collects Secret Warriors issues seven through ten and Dark Reign: The List written by Jonathan Hickman. This volume picks up after the Howling Commandos attacked H.A.M.M.E.R. and stole a helicarrier for their own use. Would this volume pick up where volume one ended and build on Fury’s struggle against HYDRA and H.A.M.M.E.R.?

The volume opens with the Secret Warriors robbing a bank. We discover our heroes have not become villains, but are taking from a HYDRA owned business. The majority of their confiscated funds are sent off to the Howling Commandos, and the team separates as Fury follows his own agenda. Some warriors relax and others monitor their communications center. One small group responds to Black Widow’s request for extraction, and their efforts to recover the super spy are hindered in an attack by the Thunderbolts. H.A.M.M.E.R. forces pursue our heroes back to their headquarters. With security compromised, the Inside Straight base launches its self destruct sequence. In a second storyline, Nick Fury recruits Agent Jason Garrett out of retirement to help him confront Norman Osborne about a national security threat. Fury works with Osborne, or does he, in countering this threat despite being one of Osborne’s top targets. Fury’s motivations as they often are may be hiding a different agenda. Finally, Fury is approached by Ares, the God of War, about his son Alex, who is both a Secret Warrior and the God of Fear. Alex must be judged by Earth’s gods. The volume ends with the outcome of the gods’ decision about Alex’s fate.

Overall this volume is fairly scattered story wise. This multiple arcs approach is one of the reasons that I preferred the first volume. The othe reason I was disappointed was I wanted to know more about the Howling Commandos and see Dugan and crew. Instead we only get mentions of the Howling Commandos and do not see how they are using their helicarrier. So the story was a little bit of a letdown because it did not offer want I wanted next. But I did enjoy the selection from Dark Reign: The List and the story of Ares and Alex. So while it may not have been what I wanted, the volume still provided entertainment value.

My favorite chapter was really the Dark Reign: The List story. We have an interesting character contrast. Patriot Nick Fury is a fugitive on the run. Villain Norman Osborne, however, is in the position of power and has the ear of the President. Additionally we discover both keep a list of goals. Both lists fit the personalities of the character. And as we would expect, I like Fury’s list best. But Osborne’s list still says a lot about his personality. The story is classic S.H.I.E.L.D. as it is filled with deceit and cool super agent gadgets.

One thing that struck me in this story is how little time Fury spends with his team. Other than the bank robbery, which feels like a clone of the Joker’s robbery in The Dark Knight, Fury really leaves the kids alone for much of the book. I honestly think that Fury spends more time with Ares than he does Alex, who is on his team I do get the sense that he trusts Daisy, but I am also not getting the vibe that he is a caring coach and mentor for her!

Honestly, I preferred the first volume of Secret Warriors. This volume just does not seem as muck like a whole story, but three story arcs. Though, I will admit I like Nick Fury’s list! And Hickman does offer up one arc which definitely feels like classic S.H.I.E.L.D..