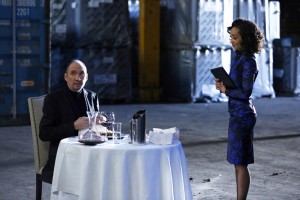 A man of taste and distinction. Who prefers raw meat. And doesn't mind human blood on his steak knife. In the middle of a steak dinner.

Okay, so I took some time off to watch some OLD Marvel TV (in our episode here, about The Incredible Hulk TV movies).

But now I'm getting back into the saddle.

Again, this episode means different things watching it after the season finale. Like May telling Ward his file says he favors his left, and Ward asking, “What else is in there?”

And Edison Po, who seemed to be large and in charge. But ended up being, well, not so much.

And Mike Peterson, working so hard to be a hero and getting the pulled in to suit up. May's first reaction is “this isn't a good idea.” And Coulson tells him there will be no third chance. Peterson is so enthusiastic and thankful.

Heck, so much changes just by the end of this episode.

But other elements are fun. Skye's snarky sarcasm seems to be lost on everyone and she has to tell people that she's actually joking.

And then you have “little S.H.I.E.L.D.” going in alone against a lab making super soldiers. There are better plans.

This was the midseason finale, ending with a cliffhanger. Just like the first mission of this episode, the mission on the bridge goes horribly wrong. And the big question: what's going on in Ward's head as he is holding a gun on his handler's people? Does he know they are Hydra or not? And if he does, is he bitter about them shooting him? They certainly didn't have to shoot him.

Peterson's “death” at the end was effective. His moral struggle was good. Skye's reaction was right.

I haven't created a rating system for this, but we're ten episodes in and out of those ten, nine of them would go on the “pretty good” side, with only one ending up on the “not so good side.” Watching these episodes as a unit, chapters in a whole, with the benefit of knowing what is  to come, is a different experience.

Next episode: The Magical Place