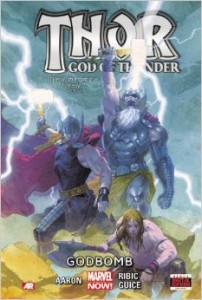 As the story opens, the reader follows the sad tale of Gorr.  The reader finds a man who is likable but experienced many tragedies.  And whenever one struck the gods were absent.  This is what triggered his quest to free mortals from god pantheons.  In the far future, Gorr plans for his journey to finally come to an end as he uses god slaves to prepare a bomb that will wipe all gods from existence throughout time.  Only three gods can challenge Gorr's plan: Thor the Viking, Thor the Avenger and Thor the Holy Hero.  The three versions of the God of Thunder join forces to save themselves from a figure who was once a man but must now ask if he has become what he hates the most!

I really enjoyed Thor God of Thunder: Godbomb!  I thought the writing from Jason Aaron was great and the concept of the three Thors to be really fun.  It was interesting to watch the three Thors play off each other.  Thor the Viking is young and rash.  Our Thor, Thor the Avenger, is seasoned over the years of fighting but is still optimistic for his future.  Thor the Holy Hero is the last of the gods.  He watched his divine friends and family be taken by Gorr and murdered and enslaved.  He no longer has optimism, but he is brave, committed and full of experience.  The interaction between the three Thors is exciting and cannot be missed.

We at Welcome to Level Seven have discussed at times what does Thor's godhood mean?  In the MCU he is most clearly an alien.  And I have gone into Marvel 616 reading Thor in the same way.  But in this book, godhood has meaning and it is not something just given to any alien.  And there are countless pantheons, though less than the galaxy's multitude of aliens.  Thor does question if gods are necessary and if they do benefit those that worship them.  But all gods and not just Thor seem to gain power from this worship.  And most importantly for Gorr's plan, killing a god releases tremendous amounts of power.  That power has over the ages made Gorr into more than a mortal man.  And his Godbomb is powered by the blood of gods.  So I have come to the conclusion that at least in Marvel 616, Godhood itself is a powerful mantle to carry.

I really did enjoy Thor God of Thunder: Godbomb.  I found it smart, insightful, well illustrated and a wonderful combination of Sci-Fi and fantasy.  My only concern is that Thor's further adventures on a small globe called earth may lack the excitement of the first two Aaron volumes under Marvel NOW!

Hey, am I the only one who has noticed all these Sci-Fi stories that Marvel has been offering lately?