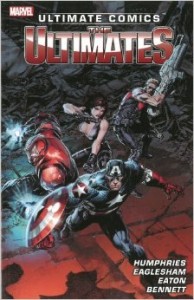 I admit it, we really should cover more books from Marvel's Ultimate Universe.  The Ultimate Nick Fury is honestly more closely related to the Marvel Cinematic Universe than Nick Fury Jr. in the Marvel 616.  And Ultimate Comices Ultimates by Sam Humphries – Volume 1 is a great example of how the MCU could use Marvel history to do interesting things with Nick Fury.

The Ultimates, led by President Captain America, face America's problems have a painful civil war.  And S.H.I.E.L.D., President Cap and Tony Stark look to a reconstructed United States.  One of the challenges facing these heroes is the Death's Head faction of Hydra which has acquired S.H.I.E.L.D. weapons.  Director Commander Monica Chang (The Black Widow) believes she has found the S.H.I.E.L.D. leak, her ex-husband and fromer S.H.I.E.L.D. Director Nick Fury!  A man named Scorpio, an older Caucasian with an eye patch, is in the Hydra camp.  And his features match the distinctive bio-camouflage disguise the African-American Fury developed for himself.  Is Fury the leak and if so what are his motivations?

This is a very different universe and a very different S.H.I.E.L.D.!  In this universe Nick Fury is on the run (just like 50 percent of all S.H.I.E.L.D. stories) with the reader not knowing his location.  And it is his ex-wife who is running S.H.I.E.L.D. and ordering agents like Hawkeye into position.   Director Change is formidable, being the current Ultimate Black Widow and having learned from Fury.  tony Stark is pretty much the MCU and 616 Stark, being a brillant inventor and businessman.  But this Stark has a brain tumor that he talks to, which he has named Anthony!  Oh, and Captain America during the civil war was elected President, serving as a symbol of American patriotism.  Yeah, names are the same in many cases but the chairs have changed.

Nick Fury has a specialized disguise, Scorpio.  The name itself stirs up S.H.I.E.L.D. lore and history.  And the result is a Nick Fury who looks like the typical grizzled Marvel 616 Fury!  it really is an interesting development for Fury fans.  We also discover that there is a Scorpio in the Ultimate Universe who has worn this face.  And this man know by both Fury and Hawkeye.  And this fact helps trigger the reader's question, Scorpio or Fury. 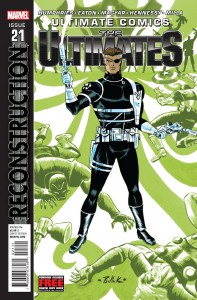 Along with interesting concepts this issue also shows the problems with the Ultimate Universe.  It's a hot mess!  For example there is a second Vision in this story.  The first was an alien robot.  This vision is a superhero of some sort.  Neither are really the 616 Vision.  It is all very confusing, especially since this Vision is older than the Robot vision.  Basically, the Ultimate Universe gets jumpled.  Her is another example.  The excellent Ultimate Iron Man arc is brillant and depicts Tony Stark only child.  But another arc show Tony Stark with a brother that appears to have been raised with him.  The continuity in this universe at times just does not make sense to me and I question if I am missing anything.