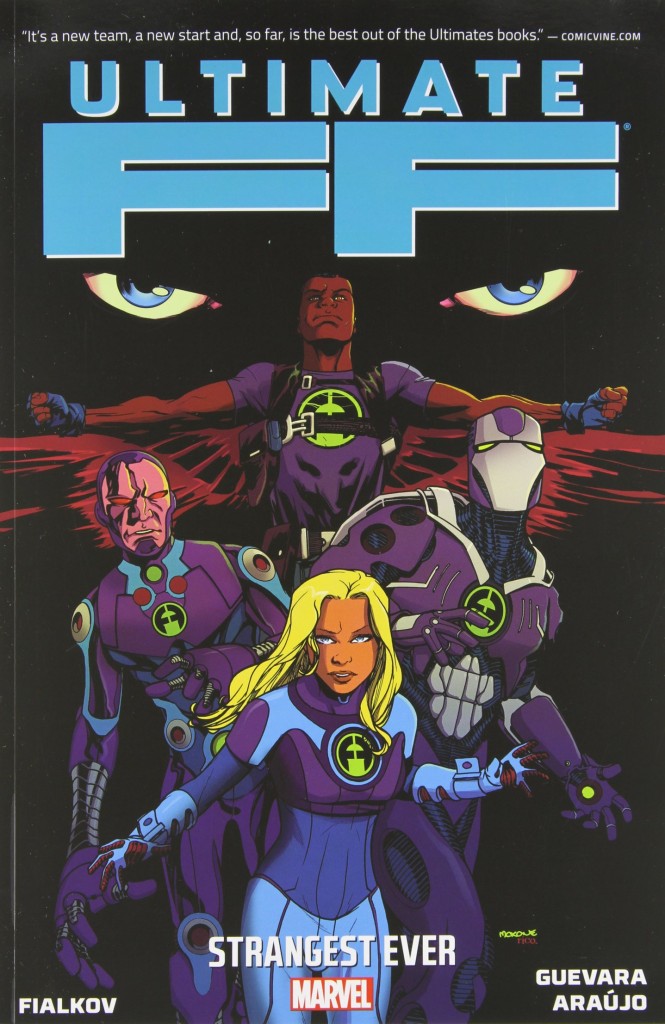 There I was reading Ultimate FF: Strangest Ever expecting a fast and entertaining read.  Then on page two…Coulson in a new role!  Would I like what is happening with Ultimate Coulson?  Would I find this read as entertaining as I hoped?  These questions and more are answered in the Comic Files!

The Ultimate Universe has survived Galactus’ attempt to eat their Earth.  But Universe 1610 continues to suffer invasions from other dimensions as the Future Foundation lead by leader Sue Storm, the money Tony Stark and Director Phil Coulson attempt to defend their world.  The Future Foundation faces off against these inter-dimensional invaders.  To meet  these challenges they will need the aid of old enemies.  And Sue Storm has to question her relationship with her old boyfriend, Reed Richards, when Miles Morhames the Ultimate Spider-Ham brings Sue a message.  Other universes are facing similar incursions.  Morhames has seen universes live and die.  But those that live all have one thing in common; a Storm-Richards child?   What will the Invisible Woman do to save her universe?

Let me just rip the Band-Aid off.  I really did not like this volume at all.  The story by Joshua Hale Fialkov is bland to my tastes.  And the art primarily provided by Mario Guevara is generally not my favorite, everyone looks swollen to me.  Really this story could have been a great link-in to the “Time Runs Out” storyline with the breaches the Future Foundation investigate serving as incursions.  And the story could have provided an alternative approach to facing world incursions.  But I cannot always tell if the breaches and incursions are the same thing and the stakes seem nowhere as steep despite the fact that Sue talks about saving the universe.  And I felt like the inclusion of the Ultimate Spider-Ham and glimpses of the Ultipets became a jump the shark moment for me.  For someone who has read a lot of Ultimate Universe material, it might be time to end the line!

The Phil Coulson found in this collection is acceptable.  He is a former S.H.I.E.L.D. agent since the spy agency has been dissolved.  And there are a number of former agents in the Future Foundations employ, like Danny Ketch the new Machine Man, and even more in their rolodex.  Also, Coulson seems to have control over former S.H.I.E.L.D. prisoners like Doctor Doom.  Coulson here really is a support player.  He is the Director of the Future Foundation, but I love that he is getting a lot of respect.  But as Director he is not the Team Leader, which is a role held by founder Sue Storm.  Coulson is the man they call for support, not the man who uses the big gun…most of the time.  There is a replay of a classic Coulson line that will make you giggle if you do not miss it.  So despite the fact of me not being a fan of this arc overall, I did appreciate the Coulson.

This is not your parents’ Fantastic Four.  Sue Storm leads the team, which feels acceptable with her long history with the team in every universe.  Tony Stark/Iron Man brings the money, and that makes some sense.  And there is a nice tension between the money, as Tony seems laz, and Sue needs him to be more.  Sam Wilson, mourning the death of his wife Vision is super smart while still being the least smart member of the team.  And Machine Man is everywhere as he has absorbed part of the Gah Lak Tus swarm.  His duplication is a whole new power!  Finally the team gets a fifth in Doctor Doom, yeah that guy.  The personality mixes is interesting as the boys are all pragmatists as Sue complains she needs another woman on the team.  Or at least she needs someone who remembers they are heroes.  Ben Grimm, Sue’s boyfriend, does not seem to be on the team.  In fact he seems to be working for the government!

What would Sue do to save her world?  It appears she will take some striking and drastic steps.  And you might just be shocked.

How shattered is S.H.I.E.L.D.?  We get to see Nick Fury in one scene.  And that scene makes it clear the old spy is retired!

Ultimate FF: Strangest Ever is honestly not a title I plan to revisit, unless forced to by Hydra.  I did like the depiction of Coulson.  And I did find some aspects interesting; such as Sue Storm’s leadership and this Ultimate Machine Man.  But I would rather be diving into volumes of Secret Avengers to get my Coulson.

Warning: Fans of Spider-Ham…grab a tissue.