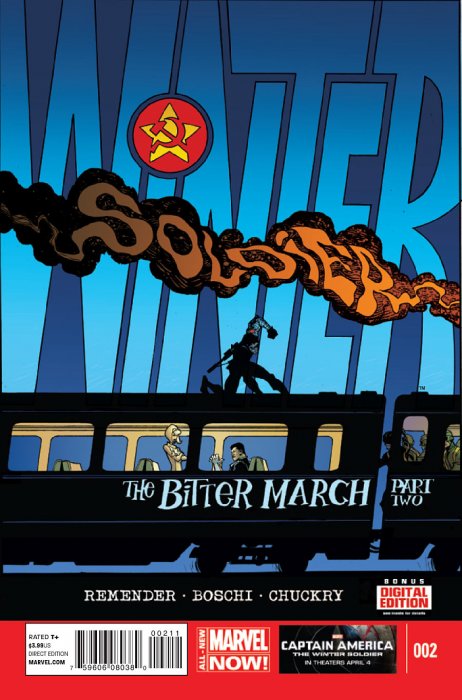 I have been pretty excited about Rick Remender's Winter Soldier Bitter March.  And my only complaint last month was not enough of the title character.  Would issue #2 correct that problem, or would it just be more Agent Ran?

Agent Ran is on the run!  He has successfully extracted the two scientists (a husband and wife pair) who had been working in the Alchemy Formula before it could be used for evil deeds.  But the Winter Soldier is hot on his trail!  And this is not the only threat he must fight against, as others want this pair for their own nefarious purposes.

I know that Agent Ran is of Asian descent.  But I swear in one panel he looks just like Sean Connery.  And I love it.  Now I will admit it might have been because he was doing his best Bond with the lady impression courting the female scientist of the pair under his watch (feel free to ignore the fact she’s married).  Ran really is reeking of Connery in this 1966 story.  The train setting in the 1960s will reminder readers of From Russia with Love.  And the fact that S.H.I.E.L.D. scientist Horace is clearly taking the role of Q makes this story all the better.  All of us are waiting for Ran’s watch to do something super or him to drive a car underwater!

The story spoils the identity of the Winter Soldier!  That is probably okay, as most comic readers likely know who he is.  And because we know who the Winter Soldier is this arc is able to serve as foreshadowing to his debut in the Captain America: Winter Soldier arc.  And as the Winter Soldier has flashbacks to his pre-villain days one does get the sense that he emotionally will have a lot of future internal conflict to sort through.  And we get plenty of Winter Soldier fighting action as he takes on Agent Ran.