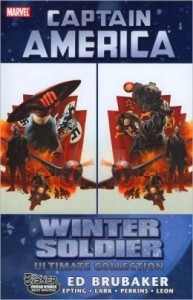 Ed Brubaker's Captain America: Winter Soldier hit my reading wish list for one simple reason, I love the trailer for the spring 2014 movie of the same name.  I am excited about this Marvel Cinematic Universe feature and really wanted to dig into one of the story sources of this hopefully epic movie.

Captain America's arch-enemy Red Skull has acquired a very weak Cosmic Cube.  And since Captain America's actions have become increasingly violent some, including Nick Fury, wonder did Cap kill the Skull.  The search for the Red Skull's murderer leads deeply into Captain America's past.  General Aleksander Lukin, the apparent mastermind behind the theft of the Cosmic Cube was mentored by Soviet Colonel Vasily Korpov who has links to Captain America, Bucky and the Invaders.  Apparently Lukin has inherited control over a Cold War assassin named the Winter Soldier who is cryogenically frozen until needed to complete his master's bidding.  The search for the Cosmic Cube includes the stories of other men who had worn the uniform of Captain America and the unbelievable identity of the Winter Soldier!

The big question is of course what could be kept.  The origin of the Winter Soldier could actually hold up, where he was a tool of the Soviet Union during the Cold War.  In fact, based on the trailer that element could really be a great addition to the MCU.  The trailer with its political thriller feel could easily be set in a post Cold War World.  And the use of that element could allow the master pulling the string of the Winter Soldier to be a former disgruntled Soviet.  And the fact that there are flashbacks to World War II would allow us to see Peggy Carter, Bucky or Howard Stark, which would make MCU fans happy.  Also we already have Cosmic Cubes in the MCU, the Tesseract.  However, the one seen in The Avengers is now being stored in Asgard.  I wonder, based on the mid-credit scene of Thor: The Dark World if another object may take the place of the Tesseract, one which might catch Thanos' interest also.  But Avengers 3 is a long way off and Marvel may not feel the need to reveal another piece of Thanos' future.

There are some changes that will need to be made.  First, Agent Sharon Carter and Steve Rodgers have a prior romantic relationship in this story.  Since we have not seen these two romantically involved in the past on the screen, the tension between the two shown in the book would be lost to the viewer.  Second, I do not believe that MCU fans will care if Sharon Carter has a romantic relationship with another S.H.I.E.L.D. agent, unless it is Agent Sitwell!  Third, there are a number of MCU cast in the movie that have no role in this story including Black Widow (will she be stealing Agent Carter's role), Sitwell, and Alexander Pierce.  Of course the role we see Robert Redford playing as Pierce is completely different from the comic Agent Pierce.  So while there are great elements from this book which the MCU can adapt, clearly the story must be greatly revised to fit within the MCU.

I think one of the biggest possible changes is the tone of the story.  The trailer shows a political thriller.  It appears that Pierce and Fury are in a struggle of some sort to control S.H.I.E.L.D..  Yes Captain America: Winter Soldier does have elements of a political/business thriller.  But honestly, it is really a very personal story of Steve Rodgers' past.  One of the reoccurring events is Rodgers hallucinating about his past. In fact he misremembers events like Bucky's death.  And the use of other Captain Americas reinforces the story element of identity.  I really hope that the personal tone of the story is kept on the big screen.  Because, while it may be a big story I hope it is also a little story about a man and his past.

I really enjoyed Captain America: Winter Soldier.  I found it to be an excellent story that explored Steve Rodgers' past and his struggles to fit into the modern world.  And the reveal of the Winter Soldier's identity is one that rocks Captain America to their core, while for the reader you have enough warning to keep from being completely shocked.  In the end, I found this to be a great story which is worth adaptation within the MCU.