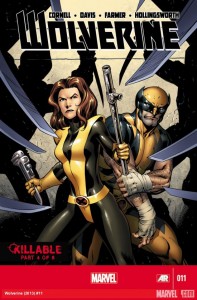 I never meant to keep following Wolverine.  Honestly, it was Savage Wolverine that caught my attention.  But with the promise of S.H.I.E.L.D. agents I find myself still reading this monthly out of the hope of catching a glimpse of Nick Fury Jr. nearly a year later!

Wolverine #11 continues the “Killable” story arc with Wolverine absent his healing powers.  Wolverine, Kitty Pryde, and some mall cops, are attacked by a splinter group of the Hand called The Fingers commanded by Sabertooth (who we never see).  The Fingers effectively torture our hero through emotin, smell and a new kind of pain.  The group also find themselves stuck in an endless loop within the mall as they attempt to escape.  Logan makes a desperate decision as the story winds down hoping to trigger their breakout.

Who hasn't felt trapped in a mall?  Seriously, everyone has, so Wolverine's problem is something we can all relate to!  Actually in many ways this is a story where we are able to relate to Logan because he is beyond exhaustion.  And everybody at one time or another has felt like they could break.  Paul Cornell has effectively found a way to make Wolverine approachable to the average reader.

I do like the Logan/Kitty team-up.  They are good, no great, friends with very different approaches.  And Kitty has taken on a mothering personality as she is the one that has a superhero ability.  It is a great reversal of classic stories in which Logan has served as the mentor.

Nick Fury and Maria Hill make one page of this issue.  They work with the Host to try to stop the nanovirus pandemic.  And we see a softer side of Fury has he shows concern for the Host as they push her to the limits of her power.  Of course, Hill has no issues with abusing the villain.

Yeah, hope for Nick Fury Jr.!  I got one page.  But I will argue that we also get a more human Wolverine as this story heads to its conclusion.