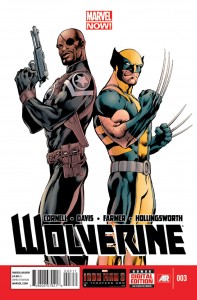 Wolverine #3 you have my attention. With a cover sporting Wolverine and Nick Fury standing back to back smirking, this issue was a must have for me. As our heroes dive into part three of “Hunting Season” you have the feeling that something truly fun is going to happen.

As the book opens, Wolverine discusses with Fury the significance of seeing The Watcher and the fact he was the only one to see the cosmic figure. The duo meets up with an unlicensed doctor in the back room of a superhero bar to remove a bullet from the alien gun from Wolverine’s shoulder (yep, that pretty much sums that up). Wolverine then introduces Fury to the bar regulars which include a cop, a superhero cataloger and worse of all a comic book writer. As Wolverine leaves the bullet for the bar squad to analyze, Wolverine and Fury infiltrate a pharmaceutical company where a battle progresses over a shipping container, whose contents will likely have an influence on the conclusion of this arc.

The new Nick Fury continues to grow into his role. One of my favorite moments is the introduction of Wolverine’s Cheers’ friends. One of them Dr. Jason Rivera catalogs superheroes, and sells intelligence on them for a price. Rivera looks over Nick and notes, Nick Fury Number Two! I love the fact that Nick is fully becoming that a character while remaining separate from dad. Though, I have to admit I would really like to see a Fury-Fury team-up despite the fact that they seem to be keeping the two from meeting up with the elder Fury’s retirement in Battle Scars.

This series has really been diving into Logan’s character and in some ways reshaping it. In Wolverine #2 we found out that Wolverine does not currently kill out of anger. And here in Wolverine #3 we find out that Logan is a people person! Fury comments that for a loner, Wolverine seems to join a lot of teams. He has the Avengers and the X-men and here we have the Bar Bunch (okay, I’m sticking with that one)! Wolverine calls out that he never claimed to be a loner and actually likes being around people. Who knew! Has someone told Hugh Jackman? Wolverine likes people enough that he does not want this situation and mind control near his Avenger teammates or his mutant students. But the Bar Bunch are cool, because they smell healthy!

There is also a really nice shout-out to S.H.I.E.L.D.’s past in the bar. On the wall of superheroes pictures there is a picture of a woman I believe is Countess Valentine Allegra de la Fontaine. It is not clear if Fury knows this S.H.I.E.L.D. legend, but it is her picture that he lingers on!

Is Nick Fury in Wolverine #4? I need to know! I guess since I have other three segments of this story arc I am probably going to grab the last issue even if S.H.I.E.L.D.’s field commander is absent. As much as I was not a fan of the Wolverine #1, the following two issues have done an excellent job digging into the character of Wolverine and changing my tune about the series. And Wolverine #3 does a good job at further installing Nick Fury Number Two into the Marvel hero lineup. Now we move onto the last issue, where we hopefully discover why The Watcher came for a visit!