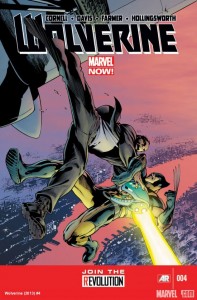 Wolverine #4 brings to an end the “Hunting Season” story arc.  And as a S.H.I.E.L.D. fan I can only hope that the Fury/Wolverine team-up continues in style and lots of action.  Will the conclusion of this tale live up to my hopes?

This story is pretty straight forward.  Wolverine seeks out the shipping container stolen at the end of Wolverine #3.  He mostly searches for the container on his own without the assistance of young Nick Fury.  Wolverine discovers that the container is at the middle of a plot that could kill 45,000 people.  Will Wolverine be able to save them all?

At the end of the story, the Watcher appears to Logan again.  And it becomes clear in the final pages that Wolverine's team-up with Nick Fury, Agent of S.H.I.E.L.D., will likely have larger and unexplained ramifications beyond this story.

We do not learn at lot about Nick Fury Jr. in this issue.  Honestly, Wolverine sends him to the bench.  Wolverine explains that S.H.I.E.L.D. culture is to throw a crowd at a problem and this incident requires a smaller response.  And since Logan can smell those infected he takes the task on himself.  I was amused by an image of Nick Fury in traffic with his flying car right above the normal flow of traffic.  But there is not much face time for our young hero.

Really most of this story is Wolverine on his own.  And not in the awesome way you would hope.  Also the Bar Bunch does not even return, and I really had looked forward to them sliding back into this story.

Can I be honest?  This story arc has resolved, but I am not really sure who the bad guys were?  And their plan is not entirely clear from the strategic level.  So I am not overly thrilled with how this turned out.

Honestly this issue devastated me.  I have been trying to figure out how to cut back on buying some books.  But the preview shot for Wolverine #5 shows a group of men in S.H.I.E.L.D. jumpsuits attempting to drown Wolverine.  How can I ignore that.  In the end, the “Hunting Season” was an okay but not great story, and one one that did not get me excited for the title overall.  But if they keep dragging S.H.I.E.L.D. into my favorite Canadian superhero's book…well I will probably keep showing up.