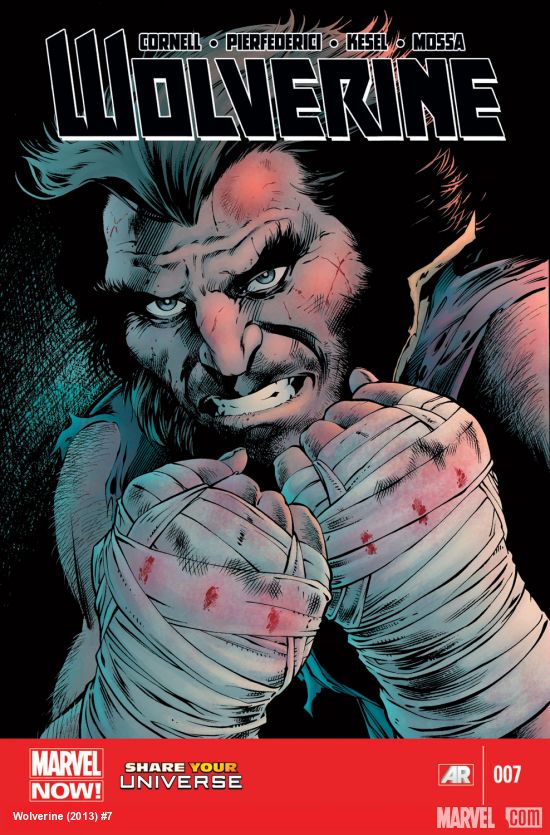 I love Wolverine. Seriously I have done some major apologizing and explaining about The Wolverine. But I had quit reading Wolverine with the S.H.I.E.L.D. arc at the end, I thought. I was wrong because Nick Fury Jr. is back to hang out with his buddy Logan.

Thanks to a Microverse virus Wolverine no longer heals. With his healing factor gone the world is full of new dangers to Wolverine including allergies. At the Guernica Bar, Logan talks hockey and his future with Agent Fury. They are joined by Thor who brings questions about being mortal to the former healing mutant. Elsewhere someone is killing villains and heroes with the ability to control viruses. When spending some down time reflecting on his situation, Fury contacts Wolverine to let him know that one virus controller still lives and has been imprisoned in Wakanda. Could this super human cure Logan’s virus?

Let us be honest, we are not here for Logan. We want to know what we can learn about Agent Fury Jr. Fury is clearly concerned for a man he considers a friend. Logan now lives in a world where threats actually exist and everyone notices that he is more cautious. He has never had to live with fear. Fury’s way to help Logan deal with his situation is to invite him to The Guernica to discuss hockey, have beer and only when probably lubricated discuss the virus. In short, Fury and Logan are regular guys, recently had a similar experience over baseball. Most can relate to two guys debating, arguing and in general being guys.

It is the immortal Thor who helps put some context on this situation. Logan thinks that Thor has come to mock him in his weakness. Instead, Thor has something very profound to say about being mortal and being a hero. He provides a great lesson we should all remember about the majesty of being made of mortal flesh.

Wow, Logan has really mellowed out. Even before he lost his healing ability he was controlling his Berserker rage. Now we get glimpses of a Logan who is able to hold down a relationship with a somewhat stable heroine. Yeah, this is not the Wolverine I grew up with!

Interesting, Wolverine loses his healing ability on the big screen, and then he does on the page in Wolverine #7 “Mortal.” I find this very very interesting agents! So, after this cliffhanger will we see a debriefing on Wolverine again soon? I am guessing yes as long as the Fury/Logan bromance continues.