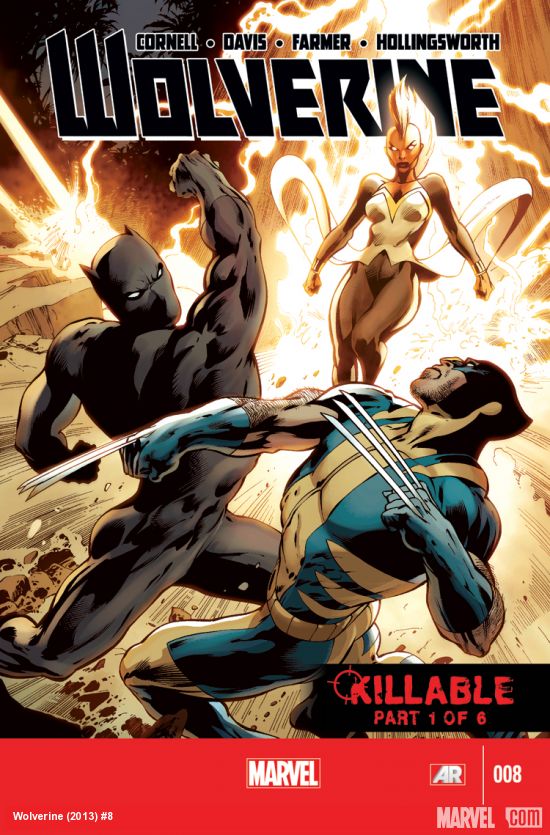 Our band of heroes heads to Wakanda, worried that Black Panther is under the influence of the virus that recently took over S.H.I.E.L.D.. For a villain that I thought would be gone in 4 issues, the fact that virus still exists in Wolverine #8 is fascinating. With this being the first installment of a 6 part story, it appears the Microverse virus is going nowhere fast.

Wolverine, Storm, and Fury slip into Wakanda to find The Host, the last person in the world with the ability to control viruses. Wolverine distracts Black Panther, while Storm and Fury attempt to free The Host. Worried that Black Panther is infected, Wolverine is forced to play on Panther’s emotions to determine if he is infected, using their histories with Storm to attempt to get a rise out of T’Challa which would prove he is infection free. And in this brawl of heroes, Wolverine still lacks his healing factor thanks to the virus. We discover that Wolverine and his team is being used by someone else to uncover who in Wakanda has been infected. The issue concludes with an intruder sending Wolverine a picture showing them violating the security of the Jean Grey School for Higher Learning.

This issue has a lot of talking. Wolverine’s fighting style is to take damage since he heals. As Black Panther points out, this is a disadvantage when one does not have a healing factor! Logan does attempt to use words to compensate for his lack of power. And the words that he goes to are linked to Wolverine’s current relationship with Storm, and Black Panther’s prior relationship. Words do hurt kids!

Storm notes that Wolverine had not adjusted yet to his circumstances. The world is now a scary place to our hero! Yet he still matches himself up with one of the world’s greatest tacticians whom has all the best toys. Is that not the description of a hero?

What do we learn about Nick Fury Jr.? Well, really nothing!

Let the massive six part story begin. Clearly we will now jump for Wakanda to the Jean Grey School. The question for me is the intruder acting since Wolverine is vulnerable or are they infected? And how does the story jump from here to solve Wolverine’s healing problem?