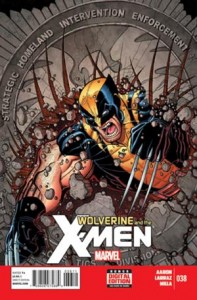 By all accounts, I made a bad choice.  Instead of following my comic book bliss I ignored X-Men: Battle of the Atom and instead started to pick up Infinity and Forever Evil.  For these two series I never made it past issue #3 of either (though I do plan to read as collections).  Then one day Agent Ben who made the right choice tells me that I need to start following Wolverine and the X-Men because the game has changed between the X-Men and S.H.I.E.L.D..  So as I jumped into issue #38 I found myself worried I would be lost as this story picked up where X-Men: Battle of the Atom left out, a party from which I was absent.

Director Hill of S.H.I.E.L.D. comes a visiting Wolverine at his Jean Grey School for Higher Learning to discuss the recent unpleasantness involving S.H.I.E.L.D. and the use of Sentinels against the X-Men.  Wolverine is not pleased.  And he is also not pleased that Hill has in tow Agent Blare, otherwise known as X-Man Dazzler, a member of S.H.I.E.L.D.'s Mutant Task Force.  There's no physical fighting, as Wolverine and Hill engage in a battle of insults.  There is a lot of jockeying and threatening!  As S.H.I.E.L.D. takes position to monitor the school, Wolverine prepares to punch and stab!

Question number 1 is am I lost?  The answer is a little bit.  I am not confused about the events which have flowed into Wolverine and the X-Men from X-Men: Battle of the Atom.  Writer Jason Aaron gives the reader just enough to be in the loop, but not so much that I feel spoiled on a story I have not read yet.  But I will say I have comic book problems.  I cannot really figure out how this shakes out in Marvel 616.  First, Wolverine and S.H.I.E.L.D. are currently working together for another 18 issues to solve the Wolverine cannot heal problem.  And Hill is cooperating there, so where does this story fall in comparison to that one.  And I know that I walked away.  But Wolverine is an Avenger and has a role in Infinity which while it might be concluding now ran at the same time for X-Men: Battle of the Atom.  So Wolverine is either in space or fighting Thanos right?  Seriously, I do not want to say it but let me say it, is there too much Wolverine?  I just cannot keep track of where he really is right now!

Now, I will say, I really liked this issue.  I have stayed away from Wolverine and the X-Men because it seemed like Wolverine and the Kids!  But I really enjoyed Aaron's story and Pepe Larraz's art.  And I love love love this Nick Bradshaw and Laura Martin cover.  This is not a silly cover.  And this is not really an all ages story, though I do feel my oldest might enjoy this story.

So S.H.I.E.L.D. is involved and that means that not everything we see should be treated at face value.  As a reader, Aaron lets you into some of the twists.  And I will admit it is kind of fun to to know some things that are alluding Wolverine and Hill.

Speaking of Maria Hill, wow Dazzler is back.  I definitely felt tense with Dazzler on the side of the law and not Wolverine.  But with two X-Men teams opposed to each other in current story lines, why is this awkward.  Poor Dazzler she is in a tough place because Hill clearly has disdain for her and Wolverine sees her as a traitor.  Where's Longshot when she needs him?

I really liked Wolverine and the X-Men #38.  I will admit it has led me to question if I have been reading the wrong Wolverine book!  This officially makes it three titles where S.H.I.E.L.D. is in our face (though we still don't have a show tie-in book).  And I am getting poorer as S.H.I.E.L.D. will also soon be taking on a certain mouth red-masked anti-hero!  Agent Ben may go on strike!