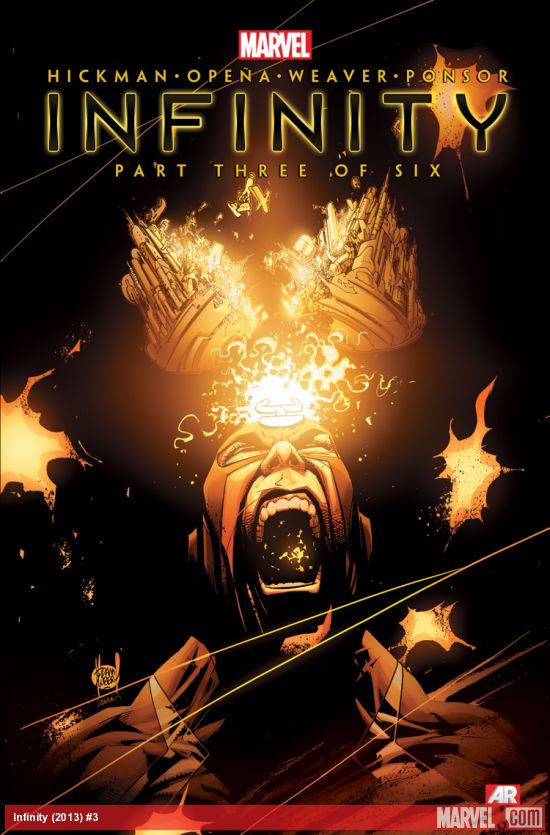 With my interest fading, would Infinity #3 save my curiosity in this series? Would I keep up with the story as I continue to refuse to read titles like Avengers and New Avengers on a weekly basis? Would DC’s Villains Month and Black Manta #1 make me question my spending habits? You will find all this and more in this Comics File!

Infinity #3 like its predecessors is broken into two story threads. In space, Captain America’s heroes continue to battle the builders. As hundreds of worlds surrender, our heroes prepare to make a desperate stand against the Builders in Kree space. And one hero discovers he has more power than originally believed. On Earth, Thanos’ hoards raid Earth and the Inhumans prepare to respond to Thanos’ demand for a tribute.

I felt like I was better prepared to follow the plot of issue #3 than I did issue #2. I did forget or missed with it being in another title that Hawkeye and some of our other heroes have been captured by the Builders. But really, while it is not seamless and Marvel likely would prefer I buy other titles, I felt like I followed the story better. It was far from perfect, but it was better.

As I review the situation report what stands out to me is this installment is not very deep. I really could summarize the action in those brief sentences. This is both good and bad, it was easy to follow along. But if you are looking for a super complex plot, based on this issue alone it simply is not present.

I really do not want to sound like I am bashing Marvel here. I understand this is a massive event. But it is easy to compare this event to Forever Evil #1 and Villains Month in DC. Originally I planned to buy only the Aquaman villain issues in that crossover event from the Distinguished Competition. But with a friend making the comment that Forever Evil #1 was decent, having read Agent Ben’s issues of the “Trinity War” which lead into Forever Evil and my excitement over Black Manta #1, I have now bought all of the Batman, Aquaman, and the single Batman/Superman villain issues. So when we look at the tale of the tape for Infinity I have bought 3 issues over 6 weeks or so. For Forever Evil I have purchased 8 issues in a month! Based on those stats DC is winning. Throw in the fact that I am not interested in spinoffs like Infinity Hunt, does lead me to question if this event is moving books.

Regardless of what Agent Ben tells you Black Manta #1 is really awesome and I love the fact that he will have an expanded role in Forever Evil!

The fact this title is split between two stories I do think hurts it. I am here for the Thanos through line. But as a reader it did not feel like the two stories were evenly split. Instead I felt the Thanos and Earth story was shorted on page count with the Builders dominating this issue. Seriously, I summarized it in one line. I still wish they had made these two separate crossovers instead of lumping them together.

I am stuck. I will buy Issue #4, mostly because at this point I am fifty percent done and I feel committed (I am a finisher). But at this point if you have not started Infinity, I would hold out for the collected trade. I do think that the story as a whole will be pretty good, but reading it in pieces is not winning me over. If you are reading this series do you agree?