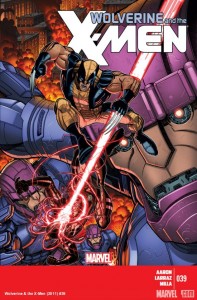 Preamble
I've been promised punching and slashing.  So Wolverine and the X-Men #39 better deliver.  I need to see some S.H.I.E.L.D. resources get damaged!  Logan can you deliver property damage?

Wolverine travels into the Rockies to a secret and not well defended S.H.I.E.L.D. base.  So of course it is a trap!  But S.H.I.E.L.D. is all about getting the most bang for the buck, so they trick Cyclops into joining Logan in the gauntlet hoping they would either kill each other or get killed by S.H.I.E.L.D.'s firepower.  Meanwhile back at the Jean Grey school two S.H.I.E.L.D. moles have very different experiences.  One agent calls an audible and prepares to attack the school while Wolverine is away!

Where's S.H.I.E.L.D.?  Honestly I expected that Dazzler would show up since she clearly has a key role in this arc.  But alas Agent Blare receives a mention only.  Most of the S.H.I.E.L.D. agents in this issue are nameless cannon fodder, easy for our mutant hero and anti-hero (you can decide who is who) easily defeat.  So yes we do get to see Agent Hill set up Logan, but we really do not see Hill.  I guess we do see a lot of S.H.I.E.L.D. in the moles, but they lack battle suits.

Wolverine and Cyclops share the same problem, other than hate for the other.  Their powers are not working right.  Wolverine's healing ability is off.  Cyclops mentions several times that he is not healing.  So is this set before Logan headed to the Canadian mall of death?  Or is this after the “Killable” arc and the outcome of that story is a weaker Wolverine.  Meanwhile Cyclops is not as strong as he used to be.  Boys, you two need to sit down, chat and share some notes!

The Jean Grey School for Higher Learning is either the best school ever or a training site for future security risks.  It all depends on your point of view.  It is fun to watch the two moles compare their very different notes.  They help us have fun getting to know this new batch of New Mutants.  And it is clear that Wolverine has taught them some skills they can use to stand up for themselves!

Wolverine and the X-Men really is becoming my favorite Wolverine book.  It really could be the kids, they provide a wild card to the experiences Wolverine fan.  And their youth provides a nice contrast to Logan's age.  In the end, there was punching and slashing.  But the action was not needed to carry the fun of the issue.