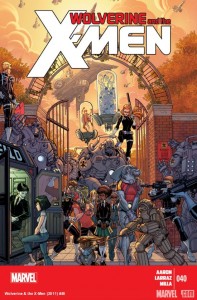 The Jean Grey School is under siege by S.H.I.E.L.D.!  Wolverine is out and about fighting S.H.I.E.L.D. sentinels and slugging the mutant terrorist Cyclops.  But based on this cover, I just want to know if the school is getting shut down by S.H.I.E.L.D.?

This issue is broken into two plots.  In the first S.H.I.E.L.D. moles Squidface and Tri-Joey contact S.H.I.E.L.D. to initiate a shut-down of the world's most dangerous school.  The students of the Jean Grey School for Higher Learning decide that if S.H.I.E.L.D. is going to close their home, they will show the moles exactly how dangerous the school is.  In the second half, Wolverine and Cyclops recover from their battle in the last issue.  And they have one of those deep discussions about their relationship and the future of mutantkind.

Where's S.H.I.E.L.D.?  Yes we have newcomers Squidface and Tri-Joey, but their control Dazzler does not even make the issue.  Honestly, the cover promises us a huge S.H.I.E.L.D. confrontation, but honestly is the action is really between two moles and the kids.  And it is not like Wolverine is slicing and dicing Maria Hill.  No, this action is appropriate to the ages of those involved.  And there is no huge number of S.H.I.E.L.D. agents storming the school.  For this being Wolverine's battle against S.H.I.E.L.D., well Wolverine other than stealing some home goods pretty much does nothing against the super spys!

Speaking of Wolverine, his healing factor is off.  So why does he not have a nasty infection?  Seriously, he still pops the claws so unless he is using some really magical gauze wrap why does he not have nasty green hands getting ready to fall off.  And I know Wolverine is though, but why is he not limping around more.  As someone who recently had a minor accident where I am walking like a senior citizen a week later, shouldn't Wolverine be hunched over after dropping a sentinel on his head?

So is this the end of the Jean Grey school?  Well, I was shocked to find out maybe!  There is only two issues left to go.  Is it because of bad storytelling, no?  Is it because of the art?  Nope!  The reason is writer Jason Aaron is too busy.  So unlike Wolverine, this title is not getting a reboot in the All-New Marvel NOW!  Nope, this title is simply fading away.  And that's despite the fact this is honestly the best Wolverine title out there right now and sells well.

Wolverine's days as an educator seem to be coming to an end.  Will S.H.I.E.L.D. close him down?  Or will another faceless multinational turn off the lights.  You know Marvel!