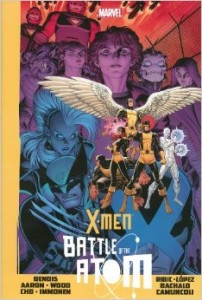 S.H.I.E.L.D. has worries.  Mutant leader Scott Summers (Cyclops) is a fugitive wanted for the murder of Charles Xavier and for reshaping the world in his own image when he was infused with the Phoenix Force.  And S.H.I.E.L.D. friendly mutant leader Wolverine is also troublesome, seeing as how the original five X-Men (including Cyclops) have been plucked out of time and are currently residing at his school!  And the two mutant camps are fighting over the new emerging mutants hoping to fill the ranks of their respective schools.  In all this tension, the X-Men of the future arrive and demand the original five be sent back to their own time before something horrible happens.  And the five time displaced X-Men do not all want to go home.  Young Jean Grey and Scott Summers go on the run, leading a chase by friends and foes who think they know what is best for the young mutants.  With the fate of the future and the past at stake, S.H.I.E.L.D. must assess their role in the mutant issue and decide what action must be taking for the security of the past and the future.

X-Men: Battle of the Atom written by Brian Michael Bendis, Brian Wood and Jason Aaron really is a fantastic story.  I highly recommend it.  It brings the three X-titles together into one common story that is logical and makes sense.  And best of all compared other arcs like Forever Evil and Infinity it is quick.  And the battle scenes are pretty awesome with past, current and future X-Men brawling on the page.  There were only two special issues of X-Men Battle of the Atom instead of 6 to 12 with numerous crossovers in other titles.  Basically this arc is short and tight, and the story benefits since it is very easy to understand and read.  This arc may prove the theory that shorter is better!

The future X-Men are really fun to see.  It is interesting seeing who grew old, who had kids, and who is missing!  I will admit, Jubilee's reaction to one X-Man was priceless.  Someone has grown a mustache baby!  And of course with all time traveling stories you also have to ask yourself did it all really happen since the time travelers of the future have impacted their past and perhaps changed their own timelines (though I generally stand by what happened happened time traveling philosophy).

Who's still around in the future, Deadpool!  “Ug!” says Cyclops and Agent Ben!  Honestly, it makes sense.  Clearly it is what the fans want and made the story arc a financial success!

Maria Hill really does have mutant problems.  And she hates Hank McCoy!  She hates Beast because he does anything he wants without thought, despite the fact he is a super genius and should understand the consequences of his actions.  The presence of the original five is proof.  She laments at least Wolverine has a code, one she may not agree with but at least a code.  As she explains her dream of the X-Men blowing up the moon to Coulson, it is clear Hill is exhausted by mutants.

The big question in many current X-books is does S.H.I.E.L.D. have a secret anti-mutant agenda.  While they may not have an agenda they do clearly have assets to counter mutant unpredictably.  And once S.H.I.E.L.D.'s hand is revealed it does change everything, especially for a friendly non-outlaw mutant like Wolverine.  I do hope this tension continues, even as Wolverine walks away from his school!

Thanks to time traveling X-Men, you can watch three generations of mutants fighting in one giant battle.  And both the angels in the devils in this story are honestly at their best and worst.  X-Men: Battle of the Atom is a great story that will give you much to think about and to be entertained by.