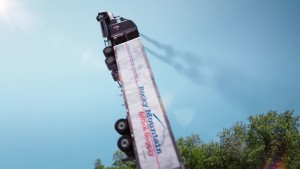 Okay, I don't care what people think. I love this opening SO much. I remember when they made this opening scene available to us before the episode aired and how exciting it was. It still is.

And I want Agent Mack to come back again! But next time? I want him to have psychic CB radio powers! (Hey, a guy can wish, right?)

Watching this episode, just the third one, and there is more set up for what was to come. But I'm surprised how defined the characters are. Yes, there was change through the season, but watching these early episodes, I feel like I'm visiting old friends. And I feel bad for what is coming to them.

Agent Mack, the truck driver, and Coulson talk about how someone inside S.H.I.E.L.D. told them the route. Now, we know it is Dr. Hall, who did it, but as soon as he said it I wanted to say, “It's Hydra!”

And of course, I cannot wait for Dr. Hall to return. As Graviton. I want to see him rise up into the air and claim that he's a god or something. We know we'll see more of him sometime, and it will be fun to find out where that goes in season two. (I hope it's season two — I don't want to wait that long for it.)

What about you? Do you want Mack to come back as an obscure comic book character from the 70s? Or would you be more interested in Hall coming back as a full fledged villain…or maybe something more? Sound off below!